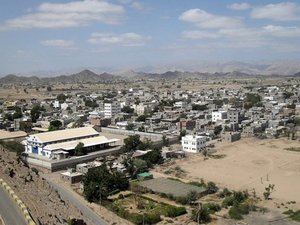 A Yemeni air raid on a convoy of vehicles near the militant-held southern city of Zinjibar killed four civilians and wounded 12 on Wednesday, medical sources and witnesses said.

The convoy that was hit had left Zinjibar for the main southern city of Aden but was forced to come to a halt when fighting erupted between government troops and the militants, witnesses said.

The casualties were taken to the al-Naqib and al-Wali hospitals in Aden, where medics confirmed the toll.

A colonel was killed in the latest fighting between the army and the militants, a military source said.

More than 100 troops have been killed since the militants seized control of most of Zinjibar on May 29.

The Sanaa government says the militants are allied with al-Qaida but the opposition accuses the government of playing up a jihadist threat in a desperate attempt to keep embattled President Ali Abdullah Saleh in power.