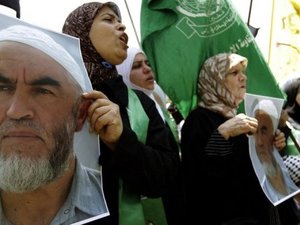 The British authorities have begun arrangements to deport Saleh, who is the head of the radical northern wing of the Islamic Movement in Israel, and have launched an investigation into how he managed to enter the country, she said.

Saleh reportedly flew into London Heathrow airport on Saturday and had been due to speak at an event at the House of Commons on Wednesday evening, organized by the Palestinian Solidarity Campaign (PSC).

"I can confirm he was excluded and that he managed to enter the UK. He has now been detained and the UK Border Agency is now making arrangements to remove him," May said in a statement.

"A full investigation is now taking place into how he was able to enter."

It is rare that ministers comment on individual immigration cases, but May said "in this case I think it is important to do so".

According to sources quoted in The Times newspaper, she was "furious" that Saleh had managed to get into Britain.

The Home Office refused to confirm press reports that Saleh was excluded only last week, nor would it say why he had been banned from Britain.

Sheikh Kamal Khatib, a spokesman for the Islamic Movement, told Agence France Presse that Saleh was arrested on Tuesday night in London.

He said it was not clear exactly why Saleh had been detained, but he blamed "the Zionist lobby in Britain" for pushing police into arresting him.

Saleh has had multiple run-ins with the law in Israel, including most recently being arrested at the Israeli border with Jordan after allegedly striking an interrogator.

In 2010, he spent five months behind bars for spitting at an Israeli policeman, and he has been detained on a number of other occasions, including in connection with an alleged arson incident.

He was also held after taking part in a Gaza-bound aid flotilla that Israeli naval commandos stormed on May 31, 2010 in a botched operation that left nine Turkish activists dead.

The Islamic Movement is tolerated in Israel but is under constant surveillance due to its perceived links with the militant Hamas movement that controls the Gaza Strip, as well as with other Islamist groups worldwide.

The PSC defended asking Saleh to speak in London.

Director Sarah Colborne said his movement was a "legitimate organization which Israel has never moved to ban" and said he regularly speaks in public in Israel.

"Before coming to Britain, he faced horrific allegations of anti-Semitism, which he completely refuted," she added.

"He has clarified his position of being opposed to all forms of racism, including anti-Semitism, Islamophobia and racism against his own people, the Palestinians."

Israel's Arab community numbers 1.3 million, about 20 percent of the population. It is made up of 160,000 Palestinians who remained in Israel after the 1948 establishment of the Jewish state, and their descendants.