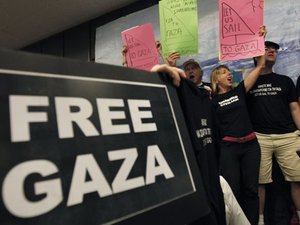 Irish activists on Thursday accused Israel of sabotaging a ship that had been due to join a flotilla to challenge an Israeli blockade of Gaza, forcing the vessel's withdrawal.

The Irish Ship to Gaza (ISG) campaign said it "believes that Israel has questions to answer and must be viewed as the chief suspect in this professional and very calculating act of sabotage".

ISG said the propeller of the ship, the Saoirse, had been "sabotaged in a dangerous manner in the Turkish coastal town of Gocek, where it had been at berth for the past few weeks".

It said repairing the damage would take some time and therefore the Saoirse "cannot participate in Freedom Flotilla 2".

Fintan Lane, ISG national coordinator, claimed it was a "reckless action" and an "act of international terrorism".

"It is an act of violence against Irish citizens and could have caused death and injury," he said.

"If we had not spotted the damage as a result of a short trip in the bay, we would have gone to sea with a dangerously damaged propeller shaft and the boat would have sunk if the hull had been breached. Imagine the scene if this had happened at nighttime."

The ISG claimed the vessel's propeller shaft had been weakened "by saboteurs who cut, gouged or filed a piece off the shaft".

"This had weakened the integrity of the shaft, causing it to bend badly when put in use," the group said.

Israel has repeatedly said it is determined to stop the flotilla, which organizers said Wednesday would comprise at least 11 ships, including the Irish boat.

A similar attempt by an international flotilla to reach Gaza in May last year ended in the deaths of nine Turks when Israeli troops stormed the lead vessel.

Nearly 300 pro-Palestinian activists from 22 countries including Canada, France, Greece, Italy and Spain are set to join this year's flotilla, among them middle-aged and elderly Americans and Europeans.

They are to be joined by 35 journalists from around the world, according to organizers.

The Irish group said concerns about the Saoirse first emerged on Monday evening following a short trip near the Gocek marina and an inspection was carried out by divers and by skipper Shane Dillon on Tuesday.

"Evidence was found that the shaft of the starboard propeller has been interfered with and it was decided to take the boat out of the water for a further visual inspection," it said.

"On Wednesday, the boat was put on land at a local shipyard and the extent of the sabotage was immediately visible."