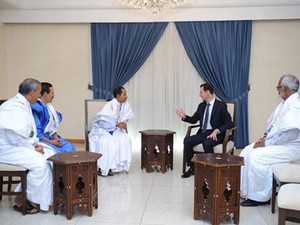 Syria's President Bashar Assad said on Sunday he is determined to "eradicate terrorism" which he blames for the conflict raging in his country, according to state news agency SANA.

"Syria has welcomed all constructive, genuine efforts to find a political solution to the crisis" that erupted in March 2011, Assad was quoted as saying.

But Damascus "is at the same time determined to confront terrorism and eradicate it," he added in reference to a rebellion that broke out against him after his regime unleashed a brutal crackdown against dissent.

Assad made his remarks during a meeting with a visiting delegation of Mauritanian party leaders in Damascus.

He said "the cohesion between our heroic army and the people" would help Damascus defeat the rebellion, according to SANA.

Assad's latest remarks come two weeks after he promised in a rare speech to strike out "terrorism" with an "iron fist".

Despite international efforts to end Syria's conflict and to bring regime and rebel representatives to the negotiating table, the war has cost more than 100,000 lives, the U.N. says.

lol gotta love the haters of President Bashar.. Going back a while you were all saying his days are numbered, he will be killed within a month at most and Syria will be liberated. Now that you're left with nothing but hollow predictions YOU the very same people jump on the propaganda train to spread hate and fear in Syrians and the wider international community. You won't win you will never break down the will of the true Arabic people because good will alway prevail over evil.