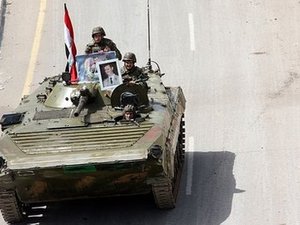 Syrian troops swept into new villages in the northwest on Thursday amid anti-regime protests in the country’s second city Aleppo, activists said.

Around 60 tanks and armored personnel carriers rumbled into two villages in the countryside of Idlib, said Rami Abdul Rahman of the London-based Syrian Observatory for Human Rights.

The operation was the latest in a campaign to quash dissent against the autocratic rule of President Bashar al-Assad.

Early on Thursday the troops stormed the village of al-Bara, a hamlet known for its Roman remains, Abdul Rahman said.

"Heavy gunfire rang out, probably to terrorize villagers to prevent them from leaving their homes," he said, adding that the troops then left heading for the other villages.

After the operation villagers were seen fleeing al-Bara and the nearby villages of al-Rami, Mar-Ayan and Kafr Haya, "heading south and west," Abdul Rahman said.

On Wednesday, 10 civilians were shot dead by troops when they stormed a cluster of villages in Idlib's Jabal al-Zawiyah district as they pressed on with their crackdown against dissent, Abdul Rahman told Agence France Presse.

That operation came a day after tanks entered al-Rami on the main road leading to Aleppo, activists said.

The crackdown comes in defiance of repeated global condemnation and warnings from Western powers to Syria to show restraint and despite new U.S. sanctions against key regime pillars and Syria's top ally Iran.

The Observatory says 1,353 civilians have been killed since mid-March in a crackdown by Assad's regime on the reformist movement and that 343 security force personnel have also died. Thousands have been arrested.

Hundreds of pro-democracy protesters swept the streets of Syria's second city Aleppo on Thursday, prompting security forces to use batons to disperse them, activists said.

Rihawi said that two people were reportedly injured and that some pro-regime supporters held counter-demonstrations.

A Facebook group that has been a motor of the uprising had urged Syrians to march on Thursday on Aleppo -- the country's commercial beacon -- to demand Assad's ouster, and to rally nationwide as well on Friday.

"The Aleppo Volcano. The people want the fall of the regime," pro-democracy activists said in a message posted by the Syrian Revolution 2011 on its Facebook page.

"Revolutionaries, come to Aleppo and Idlib provinces ... and go to central Aleppo ... to protest and to light the spark of the Revolution," said the message.

The group also called on people to rally after weekly Muslim prayers, branding July 1 "the Friday of departure" and saying in a message to Assad: "We don't love you ... Go away, you and your party."

The crackdown against Syrian protesters has been widely condemned and met with a series of sanctions.

Iran's police force was also sanctioned "for providing support to the Syrian regime," a statement in Washington said, about a week after the European Union slapped penalties on the Islamic republic for involvement in the crackdown -- charges denied by Tehran.

Assad and six top aides have already been sanctioned by Washington, and the Syrian president is also on a list of 23 figures hit by an assets freeze and an EU travel ban.

What volvano , what revolution ?? On 23 million Syrians , only few thousands Sunnis Salafis paid by the Wahhabies Bandar ben Sultan and Saad Hariri , to protest , burn and kill innocent Syrians and soldiers , to overthtrow the Syrian President only because he is Alaouite not Sunni and to replace him by a Sunni fundamentalist terrorist , like Saad Hariri and Foaud Siniora or Abdel Halim Khaddam .

The Syrian regime as we know it will fall. It has lost all legitimacy. The proud people of Syria of all religions and sects will prevail. inciting different sects against each other works only on feeble minds.

Lebanon should be ruled by all Lebanese without any exclusions. But before Lebanon can have a healthy democracy, Hezbollah terrorists must be neutralized. When that happens, Hezbollah flies (Aoun and his clowns) will follow.

@Le Phenician.... calm down bro. You hizb salary doesn't include a bonus for all the crazy rhetoric that you spew. Let's get serious for a moment... Syria is a Sunni-majority country and has been for hundreds fo years. The ruling Alawite minority took power by force thru military coup and have maintained that power violently for 2 generations now. This has nothing to do with Salafis or Wahabies or whatever you call them. Things will return to their natural order where the majority of the country will rule the land. Just as in Iraq the shiia have come back to power in Syria the Sunni will rise and no longer serve as the oppressed, impoverished, abused lap dogs of the Alawites. Hopefully they will do this without spite or vengeance and let the Alawites live amongst them as equals. Look at South Africa as a good example. Mandela did an amazing job bringing his people rightfully out of opression and back to power (remember how they described him as a terrorist and jailed him).

It seems Assad, Nassrallah and Ahmadinajad have not yet got the memo from the region’s youth that tyranny and oppression are no longer tolerated; and the unifying cry from all people is for freedom, liberty, democracy and development. Enough spending scare resources on arms, rockets, presidential guards and Shabiha. Enough creating deficits to buy loyalty by subsidy welfare. Enough suffocating business innovation and startups by subjugating economy to political mafia. Enough using profiteers and useful idiots to impose tyranny. Under no conditions there will be compromise with tyrants and useful idiots. The ground is shaking under their knees, and before long, people masses will bring them to justice to respond for their crimes.