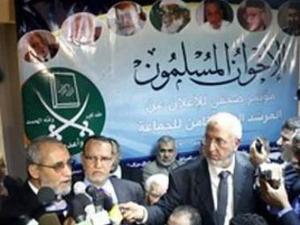 Egypt's Muslim Brotherhood told Agence France Presse on Thursday it was open to contacts with the United States as long as its "values are respected" but said there had been "no direct contacts" in the past.

"We are willing to meet in a context of respect. If the U.S. is truly willing to respect our values and support freedom as it says it does, then we have no problem," spokesman Mahmud Ghozlan said after U.S. Secretary of State Hillary Clinton said there had been "limited contacts" with the group.

"There are no direct contacts between the U.S. and the Muslim Brotherhood," Ghozlan said.

"Representatives of the United States have in the past met with groups of (Egyptian) parliamentarians, which included Muslim Brotherhood members.

"Those meetings were not exclusively attended by Muslim Brotherhood members but by a range of political forces and were chaired" by the speaker of parliament, he said.

Although there have been no contacts "direct or indirect" since the revolt that toppled president Hosni Mubarak in February, the group would consider the matter, Ghozlan said.

"The US has issues with Islamists in general and with the Muslim Brotherhood in particular," Ghozlan said. "Any future meetings will depend on (the United States)."

Clinton said her country had been in "limited contact" with the group for several years.

"The Obama administration is continuing the approach of limited contacts with the Muslim Brotherhood that have existed on and off for about five or six years," she told journalists on a visit to Budapest.