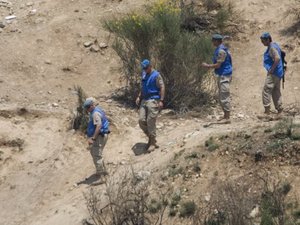 The U.N. Security Council on Thursday extended the mandate of the U.N. force monitoring the ceasefire in the Golan Heights between Syria and Israel by another six months.

The unanimous decision extends the mandate of the U.N. Disengagement Observer Force (UNDOF) to December 31, 2011.

The decision also took note of the violence in the Golan on May 15 and June 5, when the Israeli army opened fire on Palestinian refugees as Syrian forces stood by.

At least 27 people were killed in the demonstrations during the two days, and some diplomats said the accounts given in a U.N. report of the violence reinforced claims that Syria is stirring up border troubles to divert attention from President Bashar Assad's deadly crackdown on opposition protests.

These events have "put the long-held ceasefire in jeopardy," said the resolution, which called on the parties to "exercise maximum restraint and prevent any breaches of the ceasefire and the area of separation."

"Nobody is fooled," said one Security Council diplomat speaking on condition of anonymity, noting that there have been no serious breaches of the cease-fire line since 1973.

"Syria is engaging in some serious repression domestically, and wants to divert attention elsewhere," said the diplomat.

"This is clearly dangerous for the region's peace and stability," the diplomat added.

The Golan Heights was taken by Israel in 1967 and annexed in 1981, although Israel's claims to the territory have never been recognized by the international community.

Damascus wants the Golan Heights back, while Israel has meanwhile allowed 20,000 Jewish settlers to move there.

The U.N. Disengagement Observer Force, which has just over 1,000 troops, was created in May 1974 to monitor the cease fire between Israel and Syria brokered after the 1973 Arab-Israeli war.