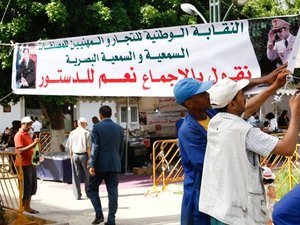 Moroccans voted Friday in a referendum on curbing the near absolute powers of King Mohammed VI, who has offered reforms in the wake of protests inspired by pro-democracy uprisings around the Arab world.

Faced with demonstrations modeled on the Arab Spring protests that ousted long-serving leaders in Tunisia and Egypt, Mohammed VI announced the referendum last month to devolve some of his powers to the prime minister and parliament of the north African country.

Under a draft constitution to be voted on Friday, the king would remain head of state, the military, and the Islamic faith in Morocco, but the prime minister, who would have to be chosen from the largest party elected to parliament, would take over as the head of the government.

Analysts say there is little doubt voters will approve the new constitution, with the only question whether turnout will be high enough to ensure the referendum result's credibility.

Polls opened at 8:00 am (07:00 GMT) and were to close at 7:00 pm, with preliminary results expected late Friday or early Saturday. About 13 million of the country's 32 million people were registered to vote.

An Agence France Presse journalist at a polling station in Sale, a city close to the capital Rabat, said several dozen people were already in line at the start of voting.

Mohammed VI, who in 1999 took over the Arab world's longest-serving dynasty, offered the reforms after the youth-based February 20 Movement organized weeks of protests that brought thousands to the streets to call for more democracy, better economic prospects and an end to corruption.

The proposed reforms fall short of the full constitutional monarchy many protesters were demanding and the movement has urged its supporters to boycott Friday's vote.

The reform plan has been hailed abroad, however, with the European Union saying it "signals a clear commitment to democracy".

Throughout a brief campaign, the new constitution has been fiercely backed by the country's main political parties, unions, civic groups, religious leaders and media. The campaign was dominated by the "yes" side, with few signs of an organized "no" vote movement.

Pro-government newspapers on Friday exhorted citizens to vote, with Le Matin urging "To the Polls, Citizens" and Liberation describing the vote as a "Date with History".

The February 20 Movement has continued to hold protests, organized through websites such as Facebook and YouTube, since the reforms were announced and maintains they do not go far enough.

In a statement posted on its Facebook page on Friday, the movement called on its supporters to stay away from the polls.

"We are calling for a boycott of this referendum because the constitution it proposes consecrates absolutism and will not make corruption disappear," it said.

Along with changes granting the prime minister more executive authority, the new constitution would reinforce the independence of the judiciary and enlarge parliament's role.

It would also remove a reference to the king as "sacred", though he would remain "Commander of the Faithful" and "inviolable".

The new constitution would also guarantee more rights to women and make Berber an official language along with Arabic -- the first time a North African country has granted official status to the region's indigenous language.