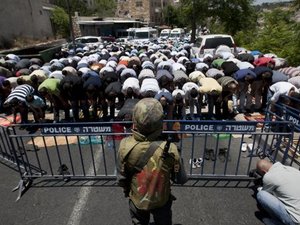 Israeli police on Friday limited access to the al-Aqsa and Dome of the Rock mosques in Jerusalem as a precautionary measure a day after clashes in east Jerusalem, a spokeswoman said.

"This Friday we are preventing access to the plaza for Muslim men less than 45 years old," police spokeswoman Luba Samri said, although she denied the restriction was linked to Thursday night's violence.

Men over 45 and women of all ages will be allowed access to the plaza, known as the Temple Mount or Haram al-Sharif, which usually fills up on Friday as Muslims stream in for their biggest weekly prayer.

Samri added police had also been "deployed in force" around east Jerusalem as security forces prepared for the possibility of clashes with Palestinians.

On Thursday night, a Palestinian was wounded when an Israeli border guard opened fire to disperse protesters who were throwing stones and Molotov cocktails at the entrance to Shuafat refugee camp in east Jerusalem, public radio reported.

Israel regularly restricts access to Friday prayers at the al-Aqsa and Dome of the Rock mosques during periods of high tension when it believes clashes could erupt after the weekly prayers.