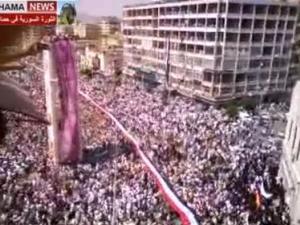 Syrian security forces on Friday killed 11 civilians as more than half a million people took to the streets across the country to demand the departure of President Bashar al-Assad, activists said.

Six people died in the central city of Homs when security forces opened fire to quash protests, two were killed in Damascus and one in Daraya, near the capital, activists told Agence France Presse.

The other two victims, a mother and daughter, were killed when the army shelled a chicken hatchery in the town of al-Bara in the northwestern province of Idlib, activists said.

Earlier, an activist in Homs, 160 kilometers north of Damascus, had said two died and at least 12 were wounded, with tanks in the city, and that "more than 100,000 people participated today in demonstrations in several districts."

In Hama, 40 kilometers further north, varying reports put the turnout at as much as more than half a million.

The head of the Syrian Observatory for Human Rights, Rami Abdul Rahman, gave a figure of more than 500,000 and said this was "the biggest (anti-regime) demonstration since the Syrian Revolution broke out" on March 15.

Another activist said that "more than 400,000 marched," adding that "they came from all over, from mosques and nearby towns."

A third said earlier that more than 200,000 had gathered in the city's Assi Square, stretching for more than one kilometer, and that there was no sign of security forces.

Abdul Karim Rihawi, president of the Syrian League for Human Rights, said "tens of thousands of protesters headed towards Deir Ezzor's Freedom Square upon leaving the mosques" after the main weekly Muslim prayers in the eastern oil hub on the Euphrates River.

In Jabal al-Zawiyah, which has been the theater of army operations since Tuesday, "tens of thousands of people started to march from the village towards Maaret al-Numan," he told AFP.

For its part, state television showed images of pro-regime demonstrations in the country's commercial hub of Aleppo, in the north, and in Suweida, in the south.

People were waving Syrian flags and chanting "God, Syria, Bashar and that's it."

Overnight, Abdul Rahman said security forces had killed three civilians in Jabal al-Zawiyah, as explosions were heard in the coastal city of Latakia.

Friday's protests followed a call from a Facebook group for people to take to the streets nationwide.

The Syrian Revolution 2011 group called on people to rally after weekly prayers, branding July 1 "the Friday of departure" and saying in a message to Assad: "We don't love you ... Go away, you and your party."

Hundreds of protesters in Aleppo, Syria's commercial hub, were beaten back on Thursday by baton-wielding security forces, activists said.

And an activist said on condition of anonymity that "explosions were heard Friday in the Latakia district of Raml al-Shamali," without elaborating.

On Thursday, the opposition also turned up the heat on Assad, announcing the creation of a "national coordination committee" of exiled dissidents and opponents at home to push for democratic reforms.

The announcement came after about 160 dissidents, several of whom have spent years in jail, gathered in Damascus earlier in the week, vowing to press ahead with a "peaceful uprising for freedom and democracy and pluralism to establish a democratic state through peaceful means."

"There are two ways forward -- the first a clear and non-negotiable move to a peaceful transition to democracy which would rescue our country and our people," opposition activist Munzer Khaddam told the meeting.

They demanded the right to demonstrate peacefully, the release of political prisoners, freedom of the press, the safe return of refugees and moves to prevent foreign intervention.

The crackdown comes in defiance of repeated global condemnation and warnings from Western powers to Syria to show restraint and despite new U.S. sanctions against regime pillars and Syria's ally Iran.

The Observatory says 1,360 civilians have been killed since mid-March and that 343 security force personnel have also died. Thousands have been arrested.

The dead demonstrators where all terrorist or something

picture posted is that of a rally in support of B. Assad and his reform initiatives. ??? what s going on naharnet??

no mazen, read the top of the TV screen: syrian revolution in hama....

The montage of the picture is flagrant ...... !!!!!! The Syrian army is behaving democratically with these terrorists !! only 6 terrorists killed !! they would have been 6000 if such a demonstration took place in KSA or Bahrain or UAE !?!

KSA - Bahrain - Qatar - Oman - Kuwait - UAE are the friends of the west , USA and Europe because they are masters in Democracy , in freedom of speech , in reciprocity with the West , in Religions , in Human rights , in Civilizations " the way they dress " !! in Traditions , in Education , in elections , in freedom of press , in women's rights , in many lots of things that correspond to the Christian West and Christianity ..

how funny he is!!! he should start a show at le casino du liban, he will attract hundreds of children!

thanks for the laughs you give us!

C'mon peace, don't be so harsh with phenicien. After all we all know that he knows everything and he does not say anything without proof. The best proof for what he is saying now is the way the syrian army behaved democratically in lebanon from 1975 till they were kicked out by lebanese terrorists. All the people they killed were terrorists and the prisoners that were tortured and died in the syrian prisons are a mere fruit of our imagination... We are crazy afterall...

Phenicien, in case you haven't figured it out (highly probable given your IQ that is touching the floor) all the above is sarcasm. Your comments are not interesting and it would be of general interest to keep them to yourself

While the US and France are backing the coktail party held by "opposition" in damas. Street protestors are dying on the street. International comunity is almost absent except from several advising, warning, wishfull, and other empty statements. El jem3a al arabia is useless as usual. The Syrian people have no one but themselves to count on and this will take time....

i see dogs barking like crazy, they didn't get civil strife they wanted now they bark on nahar and other lebanese news portals.
Just bark, dogs, all schemes of your masters have failed.

jabal amel it is not because YOU have a master that everybody else does...

go and kiss the image of your idol instead of insulting others who don t share your point of view OR try and be more explicit and give facts and arguments that allow you to compare others to dogs...

could you explain yourself please? or is it too much demanding ?