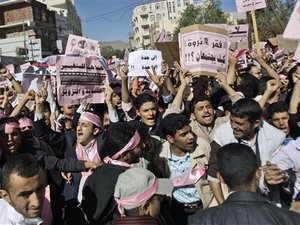 Hundreds of thousands of protesters staged huge rallies across Yemen on Friday calling for the departure of all figures in the regime of President Ali Abdullah Saleh, who has been hospitalized in Riyadh for nearly a month.

Saleh supporters also massed in Sanaa to express what they described as their "loyalty" to the veteran leader, who is receiving treatment from wounds sustained in an explosion at his presidential compound on June 3.

"We want the departure of the remains of the regime as well as the swift formation of an interim ruling council that would lead the country during a transitional period until a date is set for presidential and parliamentary elections," Wassim al-Qurshi, a leading protest activist, told Agence France Presse.

Saleh, 69, who has faced nearly six months of protests against his 33-year rule, has not appeared in public since the blast that killed 11 people and wounded 124 others, among them senior officials.

In Saleh's absence, Vice President Abdrabbuh Mansour Hadi has come under pressure from the parliamentary opposition and the West to assume power, while protesters demand that he form an interim ruling council.

But Hadi's grip on power is seen as shaky as Saleh's relatives continue to run main security systems. Key among them is his son Ahmed, who leads the elite Republican Guard

"Hand in hand to achieve our goal," chanted the anti-regime protesters, estimated by organizers to number around 250,000. "The people want a transitional council."

Further south in Sanaa, tens of thousands of people demonstrated, carrying Saleh portraits and voicing their support for the president, his son and two nephews Tariq and Ammar.

In the southern city of Taez, protesters chanted slogans against Saudi Arabia, which is suspected of trying to prevent regime change in Yemen.

"Tell Saudi Arabia that Yemen is a republic" the crowd sang, and "Yemen is not Bahrain" where Saudi troops were deployed during the repression of a protest movement in February and March.

Demonstrations also took place in Saada in the north, and in Hadramawt province in the southeast, while in the south tensions remained high around Zinjibar, which has been in the hands of presumed al-Qaida militants since May.

Soldiers defending the al-Wahda stadium outside the city exchanged fire with militants on Friday, a military source said.

Militants fired at helicopters to prevent reinforcements from arriving, the source said.

Elsewhere, an armed member of the Southern Movement, a group seeking autonomy, was killed in an attack on an army position north of Aden, and six people including three soldiers were wounded, a local official said.