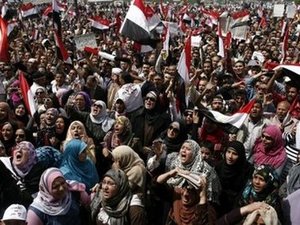 Protesters converged on Cairo's Tahrir Square on Friday to join camping pro-democracy activists for a demonstration to keep up the pressure on the country's military rulers over the pace of reforms.

Thousands of protesters were in the square including families of victims who died in the uprising to call for the trial of police officers implicated in the deaths, Agence France Presse reported.

Some held signs demanding an end to military trials of civilians, others wanted the resignation of the interior minister and the speedy and open trials of old regime officials.

"Constitution, freedom, civilian state," some chanted, as others broke off to march towards parliament.

Some protesters gathered in front of the interior ministry a few blocks from Tahrir Square, and chanted anti-police slogans. There were also small demonstrations in other cities including Alexandria and the canal city of Suez.

Protesters who first took to the streets to demand the overthrow of president Hosni Mubarak, began shifting their anger towards the ruling military council, accusing it of using Mubarak-era tactics to stifle dissent.

They also demanded a transparent political process and freedom of expression, after the military council was accused of intimidating the media by summoning several reporters who criticized it.

One protester held a sign that read: "I am a thug, I have a foreign agenda and I'm going to Tahrir," poking fun at statements by some officials who have accused the protesters of being hired thugs, or being part of a plot to sow chaos.

The imam delivering the sermon in the square -- the epicenter of protests that toppled Mubarak in February -- called for an investigation into bloody clashes that erupted in central Cairo on Tuesday.

Sporadic clashes around Cairo on Tuesday night culminated in thousands gathering in Tahrir Square, with police firing heavy tear gas and protesters pelting them with stones and rocks, amid conflicting accounts of what initially sparked the disturbances.

The clashes which left over 1,000 injured, signaled the mounting frustration with the military rulers over the pace of reform and prompted calls for an open-ended sit-in until the demands of the revolution are met.

The Supreme Council of the Armed Forces, which took power when Mubarak was ousted, has vowed to bring to justice those found guilty of abuse or corruption, ordering the trial of several old regime figures, including Mubarak.

The former leader is currently in custody in a hospital in the Red Sea resort of Sharm el-Sheikh and is to face trial, along with his two sons Alaa and Gamal, on August 3 on charges of killing protesters and fraud.

Several former ministers and businessmen associated with the former regime are on trial for corruption.

Former interior minister Habib al-Adly, who is being investigated for ordering the shooting of demonstrators, was sentenced to 12 years for fraud.

But many activists have criticized the fast pace of the trials, demanding a credible and thorough process for the sake of justice, not revenge.

Mass nationwide protests that erupted in January that saw violent clashes between protesters and police, left over 800 people dead and more than 6,000 injured.