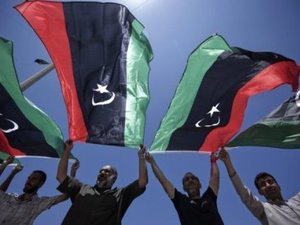 Libyan leader Moammar Gadhafi on Friday urged his supporters to get back the weapons that France supplied to rebels in the Nafusa mountains who are battling his regime.

"March on the jebel (Nafusa) and seize the weapons that the French have supplied. If later you want to pardon them (the rebels), that's up to you," the embattled Gadhafi said in a message played over loudspeakers in central Tripoli.

French Foreign Minister Alain Juppe said on Friday that this week's arms drop was meant only to defend peaceful civilians from Gadhafi's forces and thus fell in line with existing U.N. resolutions on the conflict.

"Civilians had been attacked by Gadhafi's forces and were in an extremely vulnerable situation and that is why medicine, food and also weapons of self-defense were parachuted," Juppe said, speaking on France Inter radio.

"It is not a violation of the U.N. Security Council resolutions" under which France and other allies launched air strikes and imposed embargoes to protect civilians from Gadhafi, he added.

On a visit to Moscow, Juppe said France had informed its partners in NATO as well the U.N. Security Council about its decision to supply arms directly to the rebels in Libya.

"We informed our partners in NATO and the Security Council about these deliveries," Juppe told reporters after talks with Russian counterpart Sergei Lavrov.

"We believe that within the frameworks of Resolutions 1970 and 1973 -- and 1970 as a whole -- it is clear that all means are legitimate for protecting peaceful civilians," Juppe said.

The first resolution bans all arms deliveries to Libya -- a move Russia backed -- and the second authorizes nations "to take all necessary measures" to help protect civilians against Gadhafi's forces.

Meanwhile, Gadhafi vowed anew that his forces will crush NATO, warning the military coalition: "Pull back, you have no chance of defeating this brave (Libyan) people."

"The Libyans will defeat the Crusader NATO forces," Gadhafi said in a speech to mark 100 days of NATO operations.

"Stop your operations otherwise the world will poke fun at you," he said, adding that NATO strikes were "useless."

"I advise you to stop your campaign and not to be led by a handful of traitors in Benghazi," he said in reference to the eastern coastal stronghold of the Libyan rebels.

Gadhafi, who was speaking from a secret location, invited NATO to "talk to the Libyan people."

"The people are masters of their own destiny. Discuss with them a solution to the crisis and I will help you," he said, again addressing leaders of NATO member states.

He also urged loyalists "to march on Misrata and liberate the city inch by inch, without resorting to arms."

The besieged rebel-held Misrata is Libya's third-largest city and the rebels' most significant enclave in western Libya.