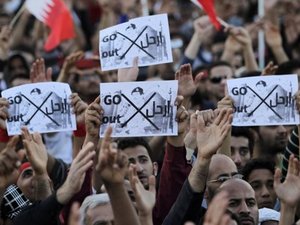 Bahrain's Sunni rulers opened a "national dialogue" Saturday aimed at getting reforms back on track after a deadly March crackdown on Shiite-led protests, buoyed by an 11th-hour decision by the main Shiite opposition bloc to take part.

Parliament speaker Khalifa Dhahrani told the opening session, which was broadcast by state television, that the dialogue would have "no preconditions and no ceiling" on the demands that could be raised by delegates.

He said the aim was to draw up "common principles for the re-launch of the political reform process".

The authorities in the Sunni-ruled Shiite-led archipelago had come under huge pressure from their Western allies to begin a dialogue with the opposition after they crushed month-long protests in mid-March with military backing from the Gulf neighbors.

The main Shiite opposition bloc, the Islamic National Accord Association (Al-Wefaq), joined the dialogue after a protracted debate on whether to take part that was resolved only late on Friday.

Senior al-Wefaq official Khalil al-Marzooq said the group's five-strong delegation would maintain its demand for the prime minister to be drawn in the future from the majority bloc in parliament, the Manama daily al-Wasat reported on Saturday.

Incumbent Prime Minister Sheikh Khalifa bin Salman al-Khalifa, an uncle of King Hamad, has been in office ever since independence from Britain in 1971 and is widely despised by the opposition.

"We do not intend to sabotage the dialogue but we do intend to bring to it the demands of the people," Marzooq was quoted as saying.

In an address to supporters on Friday, the movement's leader Sheikh Ali Salman insisted: "al-Wefaq will not abandon the demands of the people which are an elected government, a fair electoral law and an elected parliament with full powers."

Under Bahrain's current constitution, an elected lower house shares legislative powers with an appointed upper house. Al-Wefaq boycotted parliamentary elections in 2002 in protest at the division of powers, although it took part in 2006 and 2010, winning a majority of the vote.

Sheikh Salman also demanded the release of all prisoners detained as part of the government's crackdown, insisting his party would "accept nothing less."

Security forces detained hundreds of people in a wave of arrests following the crackdown, the vast majority of them Shiites.

Tiny but strategic Bahrain, the home base of the U.S. Fifth Fleet, has experienced repeated bouts of unrest between its Shiite majority population and the Sunni ruling family.

The government's crackdown on Shiite-led protests which broke out in February left 24 people dead.

Saudi Arabia deployed about 1,000 troops and the United Arab Emirates some 500 police to Bahrain in March, which freed up Bahraini security forces to carry out the crackdown.

Kuwait deployed naval forces to secure Bahrain's maritime border, a mission that lasted from mid-March to Saturday, according to the official KUNA news agency.

Al-Wefaq had threatened not to take part in the dialogue in protest at being invited to choose just five out of the 300 delegates, even though it won all 18 seats which it contested in the 40-seat lower house last year.

Its 18 MPs all tendered their resignation in March in protest at the crackdown.

After Saturday's formal opening of the dialogue, delegates were expected to meet three times a week to discuss not only political reform but the whole range of issues from economic and social issues to naturalization.

Leaders of the Shiite majority accuse the Sunni authorities of pursuing a policy of granting citizenship to Sunni expatriates in a bid to change the kingdom's confessional balance.