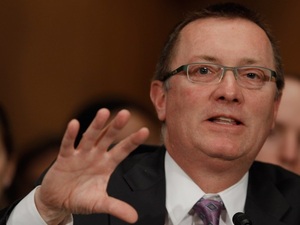 The political affairs chief of the United Nations Jeffrey Feltman is to visit Iran on Monday to discuss the war in Syria and unrest in Egypt and Lebanon, a report said.

The agency did not provide any details on the visit, the first by a top U.N. official since Secretary General Ban Ki-moon traveled to Iran in August 2012 to attend a summit of the Non-Aligned Movement.

Iran on Sunday warned against any U.S. military intervention in Syria, where the opposition has accused the regime of using chemical weapons last week that killed hundreds.

Iran is the main regional ally of the Syrian government which denies the accusations.

The Islamic republic also backs Lebanon's Hizbullah, whose members have been fighting alongside Syrian regular forces for several months against a range of rebel forces out to topple the Damascus regime.

Lebanon has been hit by two deadly bombings a week apart that killed dozens, in the northern port of Tripoli and in the southern Beirut stronghold of Hizbullah.

Feltman was in Cairo last week for talks with Egyptian officials and Muslim Brotherhood leaders on how the United Nations can help facilitate reconciliation in the unrest-hit country.

The visit comes as Iran is staggering under the weight of U.N. and Western sanctions imposed over its contested nuclear program.

The mother of the resistance is meeting with the American/Zionist Feltman to plan and chart a course for the Middle East.
Do I sound like some of you on this forum? Can you hear yourself in my post?