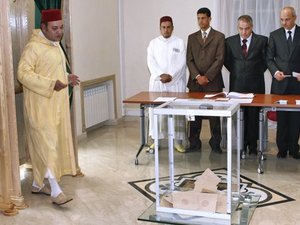 Moroccans on Friday overwhelmingly approved curbs on the near absolute powers of King Mohammed VI, with 98 percent voting "yes" in a referendum put forward after protests inspired by uprisings in the Arab world.

Interior Minister Taib Cherkaoui announced the result on state television after 94 percent of polling stations had reported results, adding that voter turnout had been 72.65 percent.

Faced with demonstrations modeled on those that ousted long-serving leaders in Tunisia and Egypt, Mohammed VI announced the referendum last month to devolve some of his powers to the prime minister and parliament, saying the reform would "consolidate the pillars of a constitutional monarchy."

Critics were quick to denounce the result and the youth-based February 20 Movement, which organized the weeks of pro-democracy protests, announced it would hold another demonstration on Sunday.

"The movement will demonstrate peacefully on Sunday to protest against this ridiculous result," Najib Chaouki, one of the movement's leaders, told Agence France Presse.

"This referendum was illegal because it was marked by massive violations of democratic principles," he said.

Cherkaoui insisted the vote had been conducted properly and said it reflected widespread support for the new constitution.

"The referendum went ahead in a normal atmosphere, and showed the degree of interaction between the people and the content of the constitutional project," he said.

In a clear bid to show the vote was supported by the young, Cherkaoui also noted that 30 percent of voters were under the age of 35.

The United States had hailed the referendum on Friday, with State Department spokesman Mark Toner telling reporters it was "an important step in Morocco's ongoing democratic development."

"In this period of profound change, we think it's important and we congratulate the people of Morocco and their leadership for the peaceful referendum," he said.

Under the draft constitution, the king will remain head of state, the military, and the Islamic faith in Morocco.

But the prime minister, chosen from the largest party elected to parliament, will take over as the head of government.

State television showed Mohammed VI, dressed in traditional Moroccan robes and wearing a red Fez hat, cast his ballot in the capital Rabat. He made no public statement.

Voters lined up in sweltering heat across the country to take part in the referendum, with many saying they supported the reforms.

At a polling station at a school in Sale, a city close to the capital, voter Youssef Ghanmi, a 35-year-old driver, said he had backed the king's reforms.

"I voted for the constitution because it allows for a separation of powers and a more independent judicial system, and will reinforce equality between men and women," he said.

Mohammed VI, who in 1999 took over the Arab world's longest-serving dynasty, offered reforms after the February 20 Movement organized weeks of protests that brought thousands to the streets to call for more democracy, better economic prospects and an end to corruption.

The reforms fall far short of the full constitutional monarchy many protesters were demanding and the movement had urged a boycott of Friday's vote.

Throughout a brief campaign, the new constitution was fiercely backed by Morocco's main political parties, unions, civic groups, religious leaders and media. The campaign was dominated by the "yes" side, with few signs of an organized "no" vote movement.

Along with changes granting the prime minister more executive authority, the new constitution will reinforce the independence of the judiciary and enlarge parliament's role.

It will also remove a reference to the king as "sacred", though he will remain "Commander of the Faithful" and "inviolable".

The new constitution will also guarantee more rights to women and make Berber an official language along with Arabic -- the first time a North African country has granted official status to the region's indigenous language.