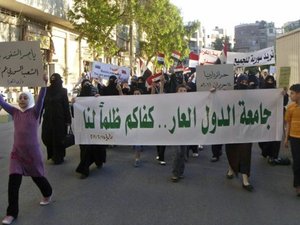 Syrian forces killed 28 civilians on Friday on a day of massive anti-regime rallies and in shelling of villages in the northwestern province of Idlib, human rights activists said.

State television meanwhile reported that President Bashar Assad sacked the governor of Hama, a day after half a million protesters flooded the central city demanding the ouster of their embattled leader.

Most of Friday's victims were killed in the Idlib province, where all week troops backed by tanks and armoured personnel carriers have swept through villages to crush dissent against Assad's autocratic regime.

"Sixteen people were killed" in Idlib on Friday, Ammar Qorabi, the head of the National Organization for Human Rights, told Agence France Presse in Nicosia on Saturday.

Three of them were women who died when the army shelled a chicken hatchery in the village of al-Bara, Qorabi said.

Another 10 people were killed when security forces opened fire to disperse protests in several cities, including eight in the central protest hub of Homs and two in the Damascus neighborhood of Qadam.

One person was reported killed in Syria's second-largest city Aleppo and another in the Mediterranean coastal city of Latakia.

A previous death toll provided by other activists late Friday gave a figure of 11 civilian’s dead, including a 50-year-old mother and her 20-year-old daughter killed in al-Bara.

Waves of protesters flooded the streets nationwide on Friday to demand the overthrow of the regime, with varying reports putting the turnout in the central city of Hama alone at more than half a million.

The head of the Syrian Observatory for Human Rights, Rami Abdel Rahman, spoke of 500,000 protesters and said this was "the biggest demonstration since the Syrian Revolution broke out" on March 15.

A third said more than 200,000 people gathered in the city's Assi Square, stretching for more than one kilometer, and that there was no sign of security forces.

Hama has a bloody past. In 1982, an estimated 20,000 people were killed when the army put down an Islamist revolt.

On Friday, an activist said that "more than 100,000 people" had protested in several districts of Homs as tanks were deployed.

Friday's protests followed a call from the Facebook group, The Syrian Revolution 2011, which called on people to rally, branding July 1 "the Friday of departure" and saying in a message to Assad: "We don't love you... Go away, you and your party."

More than 1,360 civilians have been killed in the government's crackdown against pro-democracy protests since mid-March, according to human rights groups.

Assads time is running out and so too is Le Phinicien's time with him...

400,000 spies and terrorists appearing out of thin air it's amazing...lol

The Assad family's history is commiting mass murders, Hafez got away with it with the help of his brother Rifa'at, but these shrimp looking creatures, Bashar and his brother, won't survive. The heroic Syrian people have spoken and the end of the Ba'ath party and Assad family is nearer than it looks.