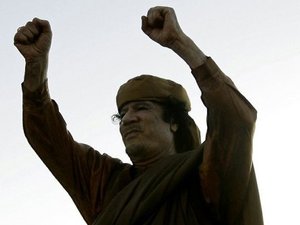 "The Libyan people are capable, one day, of taking the battle to Europe and the Mediterranean," Gadhafi said in a speech broadcast by loudspeaker to thousands of loyalists gathered in Tripoli's emblematic Green Square.

"If we decide to do so, we are capable of throwing ourselves on Europe like swarms of locusts or bees.

"So we advise you to backtrack before you face a catastrophe," he warned in a speech to mark 100 days of the military campaign by NATO countries against the North African country.

Gadhafi's regime has earned notoriety over the four decades since he seized power in 1969, arming militant groups from Northern Ireland to the Philippines, and being held responsible for a string of bombings against Western targets, including in Europe.

A Libyan agent, Abdelbaset Ali Mohmet al-Megrahi, was convicted of the 1988 bombing of Pan Am flight 103 over the Scottish town of Lockerbie, which killed 270 people, most of them U.S. nationals.

The 1986 bombing of a Berlin discotheque frequented by U.S. soldiers, which killed three people, two of them servicemen, prompted then U.S. president Ronald Reagan to call Gadhafi a "mad dog" and order air strikes against Libyan cities in which at least 15 people died.

The Libyan regime also provided arms to Irish Republican Army through the 1970s and 1980s for use in its bloody campaign against British security forces and was held responsible for the 1989 bombing of a French UTA airliner over West Africa.

The flamboyant Gadhafi was speaking from a secret location, but his voice boomed across the square, where the authorities were hoping to gather one million regime supporters.

The crowds, waving green flights and carrying portraits of Gadhafi, chanted slogans of allegiance to "God, Gadhafi and Libya," while some fired guns into the air in celebration as the night sky was lit by fireworks.

The Libyan leader urged supporters to retrieve weapons that France supplied to rebels battling his regime from bases in an armed enclave in the Nafusa Mountains, southwest of the capital.

"March on the jebel (mountains) and seize the weapons that the French have supplied," Gadhafi said.

French Foreign Minister Alain Juppe said on Friday that this week's arms drop was meant only to defend peaceful civilians from Gadhafi's forces and thus fell in line with existing U.N. resolutions on the conflict.

"Civilians had been attacked by Gadhafi's forces and were in an extremely vulnerable situation and that is why medicine, food and also weapons of self-defense were parachuted," Juppe said France Inter radio.

"It is not a violation of the U.N. Security Council resolutions" under which France and other allies launched air strikes and imposed embargoes to protect civilians from Gadhafi, he added.

Gadhafi vowed that his forces will defeat NATO and called on European leaders to talk to his people "and heads of tribes" to find a solution to the protracted crisis, saying he was ready to help.

"Pull back, you have no chance of defeating this brave (Libyan) people," he told the NATO alliance. "The Libyans will defeat the Crusader NATO forces."

African heads of state agreed late on Friday not to execute an International Criminal Court warrant for Gadhafi's arrest but ruled the veteran leader out of proposed talks on ending the four-month conflict.

The plan released at an African Union summit in Equatorial Guinea includes a commitment from Gadhafi "in favor of an inclusive process of dialogue ... and his acceptance that he will not be part of the process of negotiations."

Sieges on all rebel-held cities must be lifted, attacks ended and people taken prisoner during the conflict released, under the plan.

The proposals call for the United Nations to lift the no-fly zone which has seen NATO-led air strikes on Gadhafi's forces and to send in a "sizable peacekeeping force" with the African Union and League of Arab States.

They should make a movie about this guy.

So the ban applies to weapons, according to the UNSC resolution. And we know how the Western countries respect UN resolutions and expect black and brown people to respect them. But US and France has been dumping weapons on Libya. Why? They said that they thought it was the right thing to do. It is hilarious. Now try to tell the Lebanese that they should disarm in the face of Israeli aggression because...because the US and France only support non-violent forms of struggle. Wait: but the US and France also opposed the unarmed civilian demonstrations at the border with occupied Palestine. OK, they want Arabs to surrender to Israel and to US occupation wherever it arrives