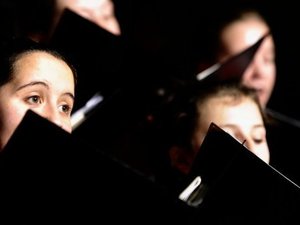 More than 22,000 youngsters -- from China to Canada -- took to the stage as a single choir Friday in the small Baltic republic of Estonia, where music is seen as a bedrock of the national identity.

A total of 22,239 performers gave the opening performance of a three-day song and dance festival, tapping into an unbroken tradition stretching back almost 150 years, organisers said.

The visiting children had to a certain amougn of Estonian, a language that often bemuses outsiders.

"All foreign singers had to learn songs in Estonian and send in their recordings in January 2011," Kaija Velmet, from the organization team, told Agence France Presse.

The choir, whose members' average age was 14, was formed from individual ensembles drawn from across this European Union nation of 1.3 million.

After months of practice at home, they headed to Tallinn this week for final rehearsals.

"I'm at this giant song festival for the second time," Stella Ploom, 12, from the village of Kaapa in southern Estonia told AFP.

"It's nice to be here because it is such a deep part of Estonian culture, but I also like being able to spend most of the week singing with friends," she added.

"The children are a bit tired, because it's been unusually hot, with temperatures of up to 30 Celsius, but they all seem happy despite the long rehearsals," Kits told AFP.

Estonia's mass song festivals for adult choirs started in 1869, when the country was part of Tsarist Russia, and have taken place every five years since then, withstanding the travails of history.

Estonia won independence in 1918 but its freedom was snuffed out by the Soviet Union during World War II.

The youth festival was launched in 1961.

The festivals were the cradle of what became known as Estonia's "Singing Revolution", a string of mass demonstrations against Soviet rule that began in 1987 and united 300,000 protesters in song.