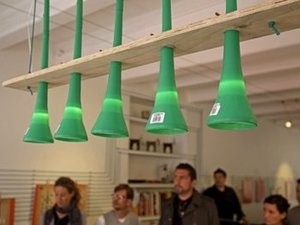 A panel of South African artists and designers have voted earrings as the best reuse of the vuvuzela, the plastic horn that became known worldwide during the 2010 soccer World Cup for its drowning buzz.

The earring design was chosen Tuesday from more than 150 photographs, videos and sketches submitted to Wozela, host of an international vuvuzela recycling competition. Matt Blitz, the event organizer, said the group had received submissions for three months starting in July.

Other top designs included a vuvuzela candlestick holder and a hanging lamp. Blitz said the best 50 design ideas will be sold and exhibited nationally.

Vuvuzelas created a constant din — and plenty of debate — at games during the 2010 World Cup in South Africa, with some embracing the horns while others complained its sound was disruptive.(AP)