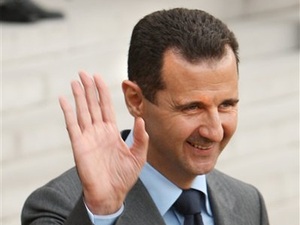 Syrian President Bashar Assad is trying to portray the image of a calm and determined leader ready to confront any challenge, as the West mulls military action against his regime.

"At the presidential palace, everything is calm today and work goes on as usual. There's no sign of nervousness. The same goes for the army headquarters. They will fight to the end," a Syrian businessmen familiar with the ruling elite told Agence France Presse on Wednesday.

"The president is carrying on with his activities and receiving advisers. You won't see any trace of tiredness or stress. He tries to show that he's in control of the situation."

An ophthalmologist by training, Assad, 47, inherited the Syrian leadership upon the death of his iron-fisted father Hafez Assad in 2000.

Now faced with the biggest threat to his rule, the younger Assad has said several times he will not step down before his mandate expires in 2014.

A European diplomat who often visits Damascus said the president insists he is "innocent of the charges leveled against him," in particular the suspected chemical weapons attack near Damascus last week.

"(He considers) the threat of Western air strikes proof that this is an international plot promoted by Israel," he added.

According to the diplomat, Assad "will appeal to Syrian nationalist sentiment by insisting on the 'aggression' of the West against the Arab world, and by presenting himself as a victim."

Faced with what started out as peaceful Arab Spring protests against his autocratic rule in March 2011, the man who had initially earned a reputation as a progressive opted to try to crush the uprising.

Few had any faith in the reforms he later announced and they failed to appease his opponents.

Throughout two-and-a-half years of conflict, in which more than 100,000 people have now been killed, the real character of this once timid man has emerged.

"No more the shy, ill-at-ease president with a nervous laugh who addressed parliament in late March 2011. Today he is much more sure of himself and has more presence," said the businessman.

"He is much more 'the boss' than before, even if he can't act without the support of the military and security apparatus," according to Nikolaos van Dam, a Dutch diplomat and author on Syria.

"He listens to his few advisers but he takes the decisions alone," said an analyst in Beirut, speaking on condition of anonymity.

Among Assad's closest aides are his younger brother Maher, who commands the army's Fourth Division, responsible for protecting Damascus from rebel advances, his uncle and cousin Mohammed and Rami Makhlouf, both wealthy businessmen, and Hafez Makhlouf, the Damascus security chief.

All of them belong to the minority Alawite sect, an offshoot of Shiite Islam that has ruled Sunni-majority Syria since 1963.

But other members of the inner circle include two Druzes, one of whom, Mansour Azzam, is minister of presidential affairs, and two veteran Sunni intelligence chiefs, Ali Mamlouk and Rustom Ghazali.

One Syria expert, requesting anonymity, said Assad had "inherited his father's cold-blooded instincts but perhaps not his savvy, if he really did give the order to use chemical weapons just as U.N. inspectors were visiting the country."

But Volker Perthes, director of the German Institute for International Affairs and Security, believes Assad is clearly not the strategist his father was.

"Bashar is too narrow-minded, and too fixed on the idea of military gains and tactics," he argued.

"This probably explains why he did not anticipate the international reaction to the use of chemical weapons," Perthes said.

Someone who regularly sees the president and his glamorous wife Asma, who hails from a wealthy Sunni family, says their life is "semi-normal."

"His wife is busy with the construction of a museum for children in the center of Damascus and also spends a lot of time with their two sons and their daughter," the source said.

"The only change in recent weeks is that they do not always sleep in the same place to avoid being the target of bombardments," she added.

Mr. President, your people love you and want you till the end of your mandate and beyond. This hollow western threat you face only cements your victory over the terrorists and their backers. The Syrians within Syria and abroad pray that you stay safe and victorious over the zionist enemy that you face daily.... Yallah,,,,, let's hear it President Assad haters... Feel free to be as hateful and racist as you like, your hate won't change the faith of the terrorists and child killers you support.

I'm not sure about what shall be considered the biggest and the longest lasting threats when potentially thousands of multi-ton bombs start to fall on various cities around the region. Call it the biggets friggin fireworks display the world has ever seen in many, many years. takbir