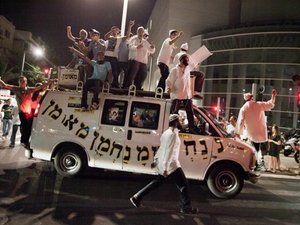 Israeli police briefly detained a rabbi on Sunday over his endorsement of a controversial book that justifies the killing of non-Jews in certain circumstances, a police spokesman said on Sunday.

The brief detention and questioning of rabbi Yaakov Yosef, son of one of Israel's leading religious leaders, prompted his supporters to take to the streets in parts of Jerusalem, burning tires and blocking the city's light railway.

Police detained Yosef for around an hour after he failed to present himself voluntarily for questioning over his endorsement of a book called "The King's Torah."

Yosef is the son of rabbi Ovadia Yosef, a highly popular religious leader who is also the spiritual head of the Shas party, which is part of Prime Minister Benjamin Netanyahu's ruling coalition.

Yosef is the second high-profile rabbi to be questioned over the book, after police last week briefly detained rabbi Dov Lior, a key member of the settler movement. His detention also prompted protests by his students and supporters.

Police spokesman Micky Rosenfeld said Yosef had been "questioned on suspicion of inciting violence and racism" over his support for the book.

"He was released after approximately an hour. After he was held, his supporters burnt tires near (the main road between east and west Jerusalem) and police also made arrests of three people who were blocking the light railway system," Rosenfeld added.

Rabbi Lior's detention last week prompted rare criticism from Israel's two chief rabbis, who described it as a "grave offence against the honor of one of the most important rabbis and leaders of religious opinion."

"The King's Torah" has stirred up controversy since its publication. Last August, its co-author, settler rabbi Yosef Elitzur was arrested on suspicion of incitement to violence.

But he was freed without charge days later after a court found police had not followed proper procedure.

The book reportedly says babies and children of Israel's enemies may be killed in certain circumstances since "it is clear that they will grow to harm us."

It also says non-Jews are "uncompassionate by nature" and that attacks on them "curb their evil inclination."

"Anywhere where the influence of gentiles constitutes a threat to the life of Israel, it is permissible to kill them," the rabbis wrote.

The book, published earlier this year, has drawn sharp criticism from many rabbis who say it contradicts the teachings of Judaism.

Who's the terrorist? The most racist state in the world. This is the party that leiberman, israels foreign minister belongs to. If a leading palestinian or iranian Muslim cleric spoke and wrote such words, it would be all over US/world media. Israel is the definition of state sponsored terrorism!