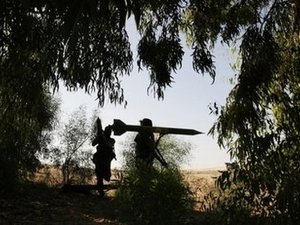 A rocket fired from the Gaza Strip struck open fields in southern Israel on Sunday, causing no damage or injuries, the Israeli army said.

"A rocket fired from Gaza fell this morning on open land in the Eshkol region," a spokeswoman told Agence France Presse.

The rocket was the first fired from Gaza since June 16, when a projectile launched from the coastal enclave also landed in Eshkol, but the border between Gaza and Israel has been largely calm in recent months.

In early April, tensions ratcheted up after a rocket-propelled grenade fired from Gaza struck an Israeli school bus, killing a teenager.

Israel responded with a series of airstrikes that killed at least 19 Palestinians in the deadliest violence since Israel's devastating 22-day Operation Cast Lead on the Palestinian territory in 2008-2009.

The violence raised fears of another such assault, but on April 10 the Hamas rulers of the Gaza Strip declared a return to the truce that ended Cast Lead in January 2009, and the calm has largely held since then.