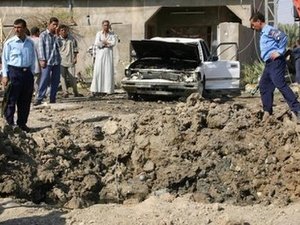 Gunmen killed five Iraqi policemen in a drive-by shooting at a checkpoint in Anbar province, west of Baghdad, on Sunday, a police officer said.

"At 8:30 am (0530 GMT), gunmen riding in a car and carrying automatic weapons killed five policemen guarding a checkpoint, before fleeing," the officer in the provincial capital Ramadi said.

He said the gunmen struck in the desert town of Rutbah, on the main highway leading from Baghdad towards Amman and Damascus.

Anbar province was an al-Qaida stronghold until 2008 when U.S. commanders began recruiting Sunni Arab tribesmen and former insurgents to form militias which turned the tide against the jihadists.

Iraq has blamed al-Qaida for the increased death toll, which was up 34 percent on May. But the US military holds Iranian-backed Shiite militias responsible for the deadly attacks on its troops.