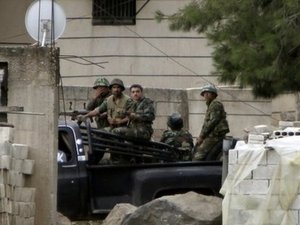 The Syrian army pressed a crackdown on dissent in the northwest on Sunday making sweeping arrests, as troops deployed in the hotbed central city of Hama, an activist said.

Troops backed by 97 tanks and personnel carriers advanced late Saturday on Kfar Rumma village and made arrests in the district of Jabal al-Zawiyah, said Rami Abdel Rahman of the Syrian Observatory for Human Rights.

Abdel Rahman told Agence France Presse in Nicosia that the troops moved to the outskirts of Kfar Rumma but did not enter it as residents tried to block them.

"Hundreds of residents emerged from their homes to confront them and prevent them from advancing, but the troops pursued their deployment to carry out their military operations."

"Security forces raided several villages in Jabal al-Zawiyah, destroying the homes of activists in Al-Bara village and arresting their relatives to pressure the activists to turn themselves in," he said.

Further south, troops deployed on Saturday at key junctions leading to Hama and "heavy gunfire" was heard in the city during the night, he added.

Syria's embattled President Bashar al-Assad sacked the governor of Hama on Saturday, a day after hundreds of thousands rallied against the regime in the city.

Anti-government protests mushroomed on Friday in response to a call by a Facebook group.

In Hama alone, 500,000 people took to the streets, without security forces intervening, activists said, calling it the single largest demonstration of its kind since the pro-democracy movement erupted on March 15.

Assad reacted to the affront by sacking the governor of Hama, a city with a bloody past where an estimated 20,000 people were killed in 1982 when the army put down an Islamist revolt against the rule of his late father, Hafez al-Assad.

God and the majority od the Syrian people are with you President Bashar el ASSAD . What your brave army is doing , is a huge and historical favor the the free world and to the western and Christian civilization.

You are fighting the same ennemy as the Western countries , like USA and Europe .

You are fighting Sunnis Salafis Wahhabies Islamic fanatism and fundamentalists terrorists . Your Victory is the free world's victory and vice versa . You are saving Lebanon from these fanatics ! All Lebanese are looking very highly at you ans at your very exceptional and wonderful army .

Thank you President ASSAD , thank you the brave Syrian army .

Let them have a real election in Syria to see what the "majority of Syrian people" want. How about that simple concept that seems incomprehensible to the followers of Iran/Hezbollah/Assad? Is it only guns and intimidation you understand?

Assad is the face of a criminal clique whose days are numbered. The Syrian people will be free. Iran/Hezbollah isn't too far behind.

(Aoun Clowns don't really matter, and will try to find another group to brown-nose)

Syria's Nuseiri Regime is coming to an end.... finally
Assad would kill hundred thousands more, Christians Alawites and Sunnis; or any other sect, willing to topple the Nuseiri regime, all with Russia's support.
However, Russia support of Assad is wavering and it won't be long before Russia submits to the will of the EU
Never mind Assad caring for the Christians; he considers them the back bone of his economical survival, otherwise they would be on the butcher bloc..

@ Le Phenicien: yes all those children and elderly killed, tortured and imprisoned are all Al qaeda terrorists, funny how the free world is all standing against Assad when you claim that he is fighting the same people they are.

You sound like Qaddafi or Mubarak facing imaginary al qaeda enemies and spies, every arab dictator is using the same playbook but somehow fools like you fall for it Phenicien so I guess it works in some cases, but the majority of people have more brain power than to believe it.

Biggest protests in Syria so far, biggest anti government protest in Yemen and rebels getting close to Tripoli in Libya, things are looking bad for the dictators.