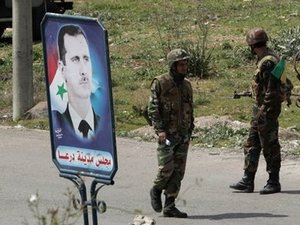 Financial sanctions and travel restrictions were imposed against 23 key players in the Syrian regime in May, including President Bashar al-Assad, intelligence chief Ali Mamlouk and interior minister Mohammad Ibrahim al-Chaar, for their "involvement in the repression against demonstrators."

"The total sum blocked is 27 million francs," said a SECO spokeswoman, adding however that she could not specify to whom exactly the assets belonged.

More than 1,360 civilians have been killed and thousands more arrested in the Syrian regime's crackdown against pro-democracy protests since mid-March, according to human rights groups.

Amid unrest in the Arab world, Switzerland has blocked some 1.217 billion francs in assets so far this year, according to ATS.

Good to see Switzerland not staying neutral when it comes to murderous dictators and their vast sums of stolen money in their banks like they used to in the past...