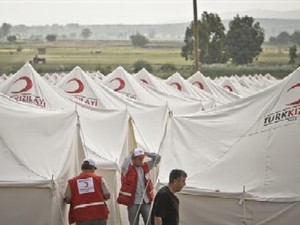 Thousands of Syrian refugees in Turkey are choosing to return home, although the neighboring country is still sheltering some 10,000 people, Turkish officials said on Sunday.

Some 343 Syrians went back to their country on Saturday, taking the total number of returnees to 5,001, the country's disaster and emergency management agency said on its website.

Turkey welcomed 20 new refugees on the same day, meaning 10,227 citizens are now being provided with shelter and food, with 60 receiving hospital care, the agency said.

The number of refugees fleeing the Syrian government's bloody crackdown and entering Turkey peaked at 11,739 at the end of June, when Syrian troops stormed border villages where many displaced people had massed.

They are living in five camps run by the Red Cross in the southern Hatay province.