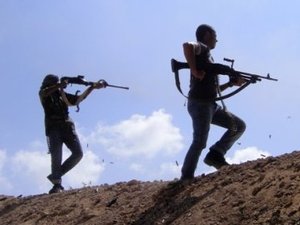 Buoyed by French arms drops and intensified NATO air strikes on the regime's frontline armor, Libya's rebel army said it is poised for an offensive that could put it within striking distance of Tripoli.

The rebels' announcement late on Saturday came as a prolonged deadlock on the battlefield prompted mounting pressure from countries outside the NATO-led coalition for a negotiated solution to a conflict that has dragged on for four and a half months.

South Africa, which has taken a lead role in mediation efforts, said that President Jacob Zuma would hold talks in Moscow on Monday with representatives of the International Contact Group on Libya as well as Russian officials.

Rebel fighters are readying an advance out of their hilltop enclave in the Nafusa Mountains, southwest of Tripoli, in the next 48 hours in a bid to recapture territory in the plains on the road to the capital, spokesman Colonel Ahmed Omar Bani said.

"In the next two days the (revolutionaries) will come up with answers, things will change on the front line," he said.

The rebels had pulled back last week from around the plains town of Bir al-Ghanam, some 80 kilometers from Tripoli, in the face of loyalist bombardment.

But last week France made a series of controversial weapons drops to rebel fighters in the Nafusa Mountains and NATO has bombarded loyalist positions around Bir al-Ghanam and elsewhere on the frontline around the rebel enclave.

In Gharyan, another Libyan government stronghold near the mountains, NATO aircraft struck eight targets over the previous four days, the alliance said on Saturday.

In its daily report for Saturday, NATO said it had launched a total of 52 strike sorties over Libya, hitting a tank near Gharyan and three armored vehicles near Zlitan, also on the Nafusa frontline.

Libyan leader Moammar Gadhafi reacted furiously to the French arms drops to the rebels, calling on his supporters Friday to go and retrieve the weapons.

French Foreign Minister Alain Juppe insisted that the arms were meant only to defend peaceful civilians from Gadhafi's forces and thus fell in line with U.N. Security Council resolutions on the conflict.

Turkey, the only mainly Muslim member of NATO and an important regional player, has gradually taken a hard line against Tripoli, after at first criticizing the Western air strikes.

There was no immediate confirmation from Moscow of the talks between Russian and South African officials and representatives of the NATO-led coalition but both countries have been outspoken advocates of a negotiated solution to the conflict.

The foreign ministry in Pretoria said the talks in Russia would include all members of the so-called International Contact Group on Libya but could provide no further details.

The Kremlin said in a statement late Saturday that Zuma and President Dmitry Medvedev held a telephone conversation in which they agreed on a "personal meeting in the closest time" but gave no details on when it would take place.

Pretoria said that the talks had been scheduled for Monday and that Zuma would leave for them later on Sunday.

The announcement came shortly after the South African president returned home from an African Union summit in Equatorial Guinea, where the continental grouping adopted a plan for negotiations between the warring Libyan parties.

"We are very happy that we have reached this point, that we can now say very soon we will be launching the talks in Addis Ababa and we believe we will get the necessary support from everyone," Zuma said after the summit.

New elements in the AU plan include provisions for a multinational peacekeeping force organized by the United Nations.

The bloc also says that Gadhafi has agreed to stay out of the negotiations, while the rebels have not ruled out his remaining inside Libya so long as he relinquishes power.

The noose is tightening around the neck of the butcher Qaddafi, murderer of Libyans and supporter of international terrorism. Saleh is out of commission, hopefully Qaddafi gets bombed next.