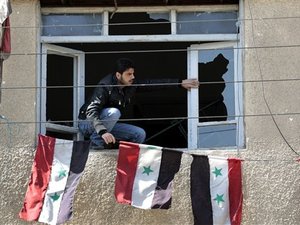 Some 100 Syrian independent figures met in the capital on Sunday to discuss a "third way" for the country, which has been rocked by anti-regime protests for three months, Agence France Presse reported.

It was the second such meeting of its kind in a week, after critics of Syria's President Bashar al-Assad vowed at an unprecedented gathering in Damascus last Monday to press ahead with a peaceful uprising.

Those present on Sunday were seeking to find "a third way between the opposition and the authorities," an organizer of the meeting told AFP.

Opposition figures who had attended the earlier meeting were also invited to Sunday's, but they all declined.

The second gathering was held in the same hotel as the first, despite a dispute between the meeting's organizers and the hotel management which opposed the event before changing its mind.

The authorities have invited the opposition to a meeting to discuss key changes to the constitution amid the deadly wave of unrest that has pitted pro-democracy protesters against security forces since mid-March.

SANA, the state news agency, said the authorities set the talks for July 10.

On Thursday, the opposition turned up the heat on Assad, announcing the creation of a "national coordination committee" of exiled dissidents and opponents at home to push for democratic reforms.

Rights groups say that more than 1,300 civilians have been killed and 10,000 people arrested by security forces since the revolt began on March 15.