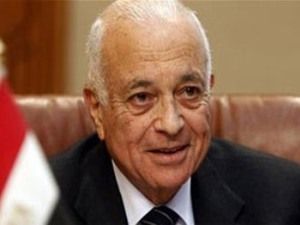 On May 15 Foreign Minister Arabi was selected to replace Moussa, whose 10-year tenure was due to expire and who harbors ambitions to run for the Egyptian presidency.

The 22-member Arab League, based in Cairo, is being tested as the "Arab Spring" overturns the region's political apple cart.

Arabi, 75, was a former ambassador to the United Nations and is an expert in international law, working at the International Court of Justice from 2001 until 2006.

As a young diplomat, he was part of the Egyptian negotiating team that concluded the peace deal with Israel in 1978-1979.

On March 6, he was appointed foreign minister in Prime Minister Essam Sharaf's cabinet, in which capacity he reopened the Rafah border crossing with Gaza and brokered the reconciliation of Palestinian factions Hamas and Fatah.

Moussa, also 75, was foreign minister from 1991 to 2001 under former president Hosni Mubarak before being appointed to the Arab League post.

Moussa is popular in Egypt, where he intends to run for the presidency in the next elections which may be held late this year.

A rotten institution representing a rotten Arab "nation".. Why Egyptian, again?
is the post of egyptian FM a right of passage to chairmanship of League of Jarab nations?