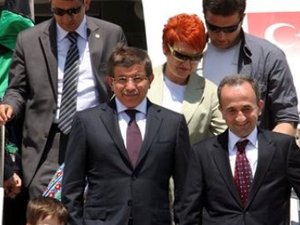 Turkey's top diplomat on Sunday recognized Libya's rebel council as the legitimate representative of the Libyan people, as he vowed to do "everything" possible to end the fighting.

Ahmet Davutoglu arrived in Benghazi, giving the National Transitional Council the much sought-after political and economic support of a major regional player and former colonial power.

"We think the Transitional National Council is the legitimate representative of the Libyan people," said Davutoglu, making Turkey the latest in a string of countries to recognize the council.

Davutoglu also indicated that Turkey could play a major role in settling the Libya crisis.

Asked if Turkey would consider hosting Moammar Gadhafi as part of a peace agreement, Davutoglu said "if there is an agreement being achieved we will do everything, everything possible."

He also pointed to a Ankara-backed roadmap that would see an immediate ceasefire, humanitarian access to all cities, the withdrawal of forces, Gadhafi leaving power and "genuine political change" as the basis of a deal.

With Libya's rebels facing a cash crunch and many cities razed by bombing, Davutoglu also arrived in Benghazi with $100 million in credit and $100 million for construction projects.

Davutoglu's visit came after his government's official journal announced on Saturday that its ambassador to Libya, Salim Levent Sahinkaya, had been reassigned in Ankara.

Sahinkaya was withdrawn from Tripoli in March because of the fighting there and had not been replaced.

Sunday's de facto recognition by Turkey also came as Libya's rebel army said it was poised for an offensive that could put it within striking distance of Tripoli.

Turkey, the only mainly Muslim member of NATO and an important regional player, has gradually taken a hard line against Libya, after at first criticizing the Western air strikes against Gadhafi's forces.

It has refused to take part in the air action, but has provided six warships to help impose a NATO-imposed arms embargo in Libyan waters.

In May Turkish Prime Minister Recep Tayyip Erdogan called on Gadhafi to cede power and last month offered him a "guarantee" that if he left the north African country he would be taken wherever he wanted.