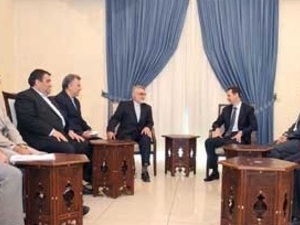 Syrian President Bashar Assad remained defiant Sunday after his U.S. counterpart Barack Obama decided to seek congressional approval for a military strike, reiterating his country was ready for any intervention.

"Syria... is capable of facing up to any external aggression just as it faces up to internal aggression every day, in the form of terrorist groups and those who support them," he said in comments carried by state news agency SANA.

In his first official remarks since Obama's unexpected announcement on Saturday, Assad said that Syria continues to "record victory after victory."

Obama's decision effectively pushes back any military action aimed at punishing Assad's regime over an alleged deadly poison gas attack until at least September 9, when U.S. lawmakers return from their summer recess.

The United States and other Western and Arab countries have blamed the Syrian government for the suspected August 21 attack, which Washington says killed more than 1,400 people -- accusations Damascus categorically denies.

Meanwhile, a senior Iranian official warned in Damascus on Sunday that U.S. interests in the region would be at risk if Washington launched a military strike against his country's ally Syria.

Iranian officials have issued stern warnings against U.S.-led military action targeting Syria and the latest came from the chairman of the foreign policy committee of Iran's parliament.

"I hope that the United States will not undertake any precipitated and irrational action, due to the sensitive situation in the region," Allaeddine Boroujerdi told reporters.

"The Americans cannot threaten the countries of the region and expect that their own interests will not be threatened," he said, a day after talks with Assad.

"If the United States carry out a foolish act, our response will be decisive," said Boroujerdi, in remarks translated from Farsi into Arabic by an interpreter.

On Saturday, the head of Iran's powerful Revolutionary Guards warned that a U.S. strike would trigger "reactions beyond" Syria and bolster extremism.

And Iran's supreme leader Ayatollah Ali Khamenei has said a strike on Syria would be a "disaster" for the region.

Assad, show your firepower. let us have a good laugh!

Sure he's got firepower-- that of the mouth and talk! He cannot even defeat the rebels that are trying to overthrow him. As for Iran they need a strike that will silence their garbage laden mouths. Wait till the US strikes!

Please hold your breath till they strike!!

We will all celebrate Assad's demise- you are in the monority along with your uneducated Islamic masters from Tehran and the Lebanese puppets that take orders from them. Because Assad's army could not defeat the "terrorists" from overseas, they resorted to chemical weapons.... agains innocent women, old people and children How cowardly and cheap! Mark my words, Assad'd downfall is not going to be pretty.

What would President Assad have to gain from the alleged use of the chem weapons. My friend, at the very least the uneducated society that I back have just democratically elected a woman into their parliament, what can you say your puppet masters from KSA done for woman's rights. Your likes have been delusion now for almost 3 years but delusions don't bring the demise of presidents..