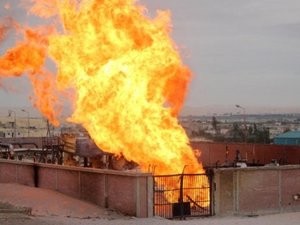 Saboteurs bombed an Egyptian gas pipeline in the Sinai Peninsula on Monday, sending flames into the sky and cutting supplies to Israel and Jordan, a security official said.

Officials said a car had parked near the pipeline in the Bir al-Abd area, 80 kilometers from the north Sinai town of el-Arish, shortly before the explosion.

They said the bomb was activated remotely.

Emergency services were deployed to the area to try to bring the fire under control, an official said.

Witnesses said the flames reached as high as 10 meters. There were no immediate reports of casualties.

It was the third attack since February, when an uprising toppled former president Hosni Mubarak and saw power handed over to a military council.

On April 27, the pipeline in the al-Sabil area in north Sinai was also attacked, cutting off international gas supplies.

In February, attackers used explosives against the pipeline in the town of Lihfren in north Sinai, near the Gaza Strip.

There was also a failed attempt to attack the pipeline in March.

Egypt supplies about 40 percent of Israel's natural gas which is used to produce electricity. In December, four Israeli firms signed 20-year contracts worth up to $10 billion to import Egyptian gas.

In April, Egypt's Prime Minister Essam Sharaf asked for the revision of all contracts to supply gas abroad, including to Israel.

Sharaf said the contracts would be revisited so the gas "would be sold with deserved prices that achieve the highest returns for Egypt."

The controversial gas deal with Israel has been repeatedly challenged in Egyptian courts on the grounds of its secretive clauses and because it was done without parliamentary consultation.

A court imposed an injunction on the deal, in a move ignored by Mubarak's government. A higher court overturned the freeze in 2010, on condition the government regulate the quantity and price of gas exported.

Israel's government viewed the ouster of Mubarak with alarm.

Egypt was the first Arab country to sign a peace deal with the Jewish state in 1979, but the public has remained hostile towards Israel over its policies in the occupied Palestinian territories.

After the military took power following Mubarak's ouster, it pledged that it would respect the 1979 peace treaty with Israel.

In May, Jordan said Egypt was withholding its contracted gas supply to energy-poor Jordan unless a new deal was signed at a higher price.