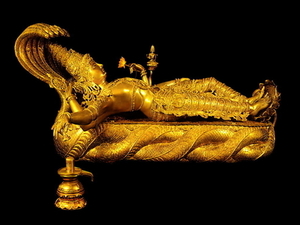 Armed commandos cordoned off a medieval Hindu temple in south India on Monday after gold coins and precious stones worth billions of dollars were found in its vaults.

Surveillance will be in place around the clock, and security forces are setting up a special control center and looking at bringing in cameras.

"The treasure will be kept in the temple itself and Kerala police are taking over its security from temple staff," said Chandy, who valued the discovery at 500 billion rupees ($11.2 billion) on Saturday.

A sixth is set to be explored on Monday.

Retired Kerala High Court judge C.S. Rajan, who is part of a seven-member team named by India's Supreme Court to monitor the treasure hunt, estimated Sunday that the valuables could be worth up to a trillion rupees ($22 billion).

"Its antique and archeological value has not been yet been taken into account," he stressed.

A seventh vault reinforced with iron walls would be opened only after fresh instructions from India's top court, he said.

K.N. Panikkar, an eminent India historian, said the treasure was most likely a combination of gifts donated by devotees to the shrine and the wealth of the erstwhile Hindu royal family from the local kingdom of Travancore.

The Times of India said one tonne of gold coins -- some dating back to the era of French military leader Napoleon Bonaparte -- as well as sacks full of diamonds and golden statues were among the artefacts discovered in the temple.

The national conservation agency, the Archaeological Survey of India (ASI), said it was stunned by the findings.

"Right now we are working in absolute darkness and we only know that fabulous treasure is pouring out," ASI Director-General Gautam Sengupta told AFP.

"No archaeologist has ever experienced vault after vault being opened and treasures being discovered like this," Sengupta said in New Delhi, adding that many of the Hindu shrines across India were "very rich".

The discoveries have catapulted the Hindu shrine, renowned for its intricate sculptures, into the league of India's richest temples.

It was built hundreds of years ago by the king of Travancore and donations by devotees have been kept in the temple's seven vaults since.

Since India achieved independence from Britain in 1947, a trust managed by descendants of the Travancore royal family has controlled the temple.

Shashi Bhushan, a Kerala-based historian, told the Mint business newspaper that the treasure was likely to be "the proceeds of trade" from the state in southern India, which was a centre for spice trading.

The Supreme Court recently ordered that the temple be managed by the state of Kerala to ensure the security of its valuables.

Until now, the Thirupathy temple in southern Andhra Pradesh state was believed to be India's richest temple, with offerings from devotees worth 320 billion rupees.