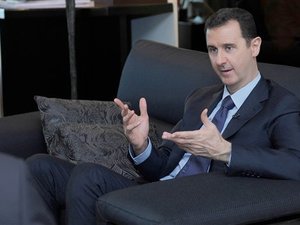 In it, the Syrian president extended his "sincere congratulations" to Kim and "the friendly people" of his country 65 years after the establishment of the Democratic People's Republic of Korea, the North's formal name, according to KCNA.

The report said Assad also reconfirmed Syria's efforts to strengthen the "friendly and cooperative" relations between Syria and North Korea.

It came one day after South Korea's defense ministry called for fresh attention to North Korean chemical weapons, suggesting such arms might have been traded between Pyongyang and Syria.

"We believe there has been a chemical weapons connection between North Korea and Syria," Defense Ministry spokesman Kim Min-Seok told reporters on Thursday.

The report also came as 11 of the nations attending the G20 summit in St. Petersburg in Russia Friday called for a "strong" response to a chemical weapons attack in Syria blamed on the Assad regime.

U.S. President Barack Obama argued at the end of the summit Friday that the world cannot "stand idly by" after the chemical weapons attack outside Damascus last month which the U.S. claims was launched by Assad's regime.

According to U.S. intelligence, more than 1,400 people living in rebel-held suburbs of Damascus were killed in the August 21 chemical weapons attack, which involved the use of sarin nerve gas.

However Obama and Russian counterpart Vladimir Putin failed Friday to end their bitter dispute over U.S. plans for military action in Syria.

Any link between North Korea and the attacks in Syria could further isolate Pyongyang, which is prohibited from international sales of its weapons under U.N. sanctions for conducting nuclear and missile tests.

Suspicions over chemical weapons trade between Pyongyang and Damascus have been raised in the past.

The North is believed to have up to 5,000 tonnes of chemical weapons deliverable by artillery or missile, Kim said Thursday.

South Korea supports international sanctions against Syria because the regime's use of chemical weapons, if confirmed, could give the wrong signal to North Korea, he said.

A report by a U.N. Security Council panel of experts said in June that Pyongyang had continued to import and export items relevant to missile and nuclear programs.

LOVE from one dictator to another......an endangered species

in the same letter, assad asked kim jong un to send his best men to syria.

this is one of the last messages N Korea is going to get from syria.