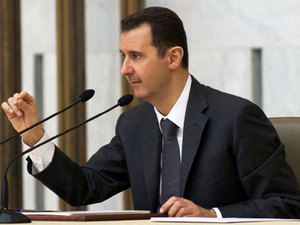 "The national leadership of the Arab Socialist Baath party discussed with other Syrian parties the latest developments in light of threats to launch an attack against Syria," SANA reported.

The decision appeared to be largely symbolic, and comes as U.S. President Barack Obama asks Congress to authorize military strikes on Syria.

Obama wants to launch the strikes in response to an alleged chemical weapons attack in the suburbs of Damascus on August 21.

Washington and much of the international community accuses Syria's government of responsibility for the attack, which reportedly killed hundreds of people.

President Bashar Assad's government denies responsibility and has warned of regional repercussions if military strikes against Syria go ahead.

God Bless the Syrian Baath Party for being in constant session to face the American-Israeli-Saudi-Turkish aggression against the pulsating heart of the democratic Islamic and Arab Worlds. By consulting with other Syrian (non-existent) political parties on the impending events, the Baath and President Assad once again prove to the world how consensus is achieved in truly democratic societies. By meeting, sleeping, and dining in the same room 24/7 (constant session) to handle events as they unfold, the Baath leadership of Assad has set an example of what sacrifice means when national interests are at stake. May the Lord strengthen your resolve as you move forward to defeat this un-called for aggression.

The Baath party had given Syria, say the least, the women freedom, child protection and proper obligatory education for every child. Something is lacking from any regional or Arabic state. Regardless of the aggression by the Israeli-West-Backwarded Arabs states against Syria. And by the way, the only reason these States are against Syria is for that reason only "Baath." Look here, September 11 was committed by the culture of Saudi and Egyptians (if you know what I mean) yet the States did not attack Saudi Arabia or Egypt actually quiet the reverse. WHY? because that culture is the best for Israel maintaining stupidity and Backwardness on the people of the country. USA will never attack you unless it fears you: fears the culture of progression.

Child protection? didnt this whole mess begin by the arrest and torture of children by the Baath for writing anti-regime graffiti on walls?
please send me your kids so i can "protect" them Baath style... since you consider it so proper.

really , that s why saddam was removed because they fear his culture... makes no sense what u say

You gotta be kidding or your stupid i cant believe the level of nonsense some people believe. Assad is a Historical Level Tyrant undeniable forget all conspiracys and look at the facts.

you are truly a unthinking shill for ASSad and the baath. The baath party is based on the old Soviet style where the will of the state is imposed on the people by using secret police (mukhabarat) and secret prisons. IT IS NOT DEMOCRACY NOR DOES IT PREACH FREEDOM.

You are truly a confused individual--please seek help.

Thank you .I am nearly 80 years old so i know a little bit history than most of the writers here .
I appreciate that you understand exactly the situation .
As soon as one the Middle East countries is doing very well , They started bombing it like Irak .

Go back further into history .In Egypt when it started to modernise itself under Mohammed Ali Pasha ( 1769-1849) , they put a stop to his power and later on The English took over Egypt
There are lots of exemples to show you that the Western powers are only interested in themselves and just go around destroying countries .
Only stupids and ignorant people dont understand their real goal.
Nowadays They want the destruction of Damascus as being a threath (in their sick mind ) to Israel.Some American believe in the old Testament You can read about it in the english websites
Anyway , thanks

Thank you. No one trying to claim the higher moral ground here. But it is absurd to cheer for the USA against Syria. and if you are against Assad, you gather force of voice NOT arms to reason with the government. Eliminating Alwaites and Christian is not the answer to Syria.

May bachar go to hell and pay for all the crimes he did....
Starting by the crimes to all the lebanese from all religions

You are so ignorant that I can't find any word to say to you other than "jahale" will make you say what you said!!!

enough with your elimination wars......