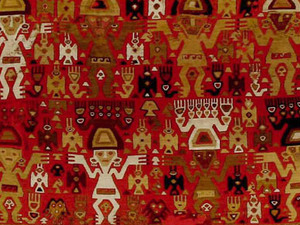 The cultural chief in Gothenburg said Tuesday he was surprised to hear that Peru plans to sue Sweden's second city for the alleged theft of pre-Columbian textiles on exhibit at its museum.

"This comes as a total surprise to us, because we've had a good dialogue with Peru ever since they demanded we return the items in question," Bjoern Sandmark, who heads Gothenburg city's culture service division, told Agence France Presse.

Peruvian President Alan Garcia said Monday his country planned to sue the southwestern Swedish city on charges of being an accomplice in the theft of more than 100 colorful Paracas culture textiles, which are more than 2,000 years old.

The textiles are on exhibit at the Gothenburg city-owned Museum of World Culture.

The Paracas culture flourished on Peru's southern coast from around 100 BC to 200 AD, but little was known about their people until archaeological excavations starting in the 1920s.

Sandmark said he hoped legal action could be avoided, pointing out that the tone had been positive when he had met twice with Peru's ambassador to Sweden and, most recently in March with the new general consul.

The city's culture council had quickly recommended returning the objects to Peru, but since the final decision lies with Gothenburg's municipal council, which is not likely to handle the issue until after the summer holidays, he said.

"These things often take time," he explained, adding that he thought Peruvian authorities understood and agreed with the process.

He said such exchanges should be handled "between museums and not at a state-level."

According to the Gothenburg museum website, "large quantities of Paracas textiles were smuggled out of Peru and illegally exported to museums and private collections all over the world around 1930. About a hundred of them were smuggled to Sweden and donated to the Ethnographic Department of the Gothenburg Museum."

The town officially possesses 89 of the textiles, displayed since 2008 and under surveillance, according to the website.

In May 2010, Sweden returned 33 pre-Columbian textile fragments to Peru, the Latin American country most affected by theft of archaeological artifacts.

The reason why Peru is the Latin American country most affected by theft of archaeological artifacts is because of the astonishing amount of peruvian relics around.