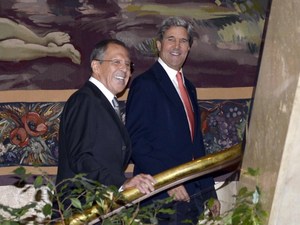 The two men leading diplomatic efforts to end the war in Syria seem like complete opposites. One is a hard-nosed Russian happy to be known as "Mr No", the other an affable, wealthy American, known for his verbosity and occasional gaffes.

Yet despite their different views and backgrounds, U.S. Secretary of State John Kerry and his Russian counterpart Sergei Lavrov seem to have managed in a few short months to develop the working rapport which could prove key in the tough talks ahead.

Lavrov, who has deftly steered Russia's diplomacy through choppy global waters for almost a decade, had notoriously stormy relationships with both of Kerry's predecessors, Condoleezza Rice, a fluent Russian speaker, and Hillary Clinton.

Despite the famous 2009 reset of U.S.-Russia relations when Clinton handed Lavrov an amateurish red button, ties plunged and rapidly deteriorated in 2012 amid a series of bilateral crises.

Last year, the usually unflappable Russian, who is smoothly adept at handling international crises in which Moscow is often at the sharp end of global criticism, came close to insulting Clinton, who by then had been dubbed the "rock star" of U.S. diplomacy.

After she denounced Moscow's veto of a U.N. resolution on Syria as a "travesty," he countered that the criticism against his country bordered "on the verge of hysteria."

But Kerry made a point of meeting with his Russian counterpart on his maiden trip abroad in late February, holding their first talks in Berlin.

Since then the two men have met at least six times in various European capitals and cities, often over late-night dinners, either just face-to-face or with a small team of their closest aides.

Kerry even felt comfortable enough to tease Lavrov in front of the world's cameras late Thursday ahead of key Geneva talks on Syria's arsenal of chemical weapons.

After Lavrov said: "I hope we will achieve all the successes", Kerry pointedly asked the translator to repeat what he said.

He then quipped: "You want me to take your word for it? It's a little early for that," before giving his counterpart a friendly slap on the shoulder.

Early Friday, Kerry invited Lavrov to ride along in his sleek motorcade as it screeched away from the luxury Geneva hotel in which they are both staying for a short hop to the nearby U.N. Palais des Nations.

And in another rare break with tradition, Lavrov even publicly spoke in English alongside Kerry and U.N.-Arab League envoy Lakhdar Brahimi at an impromptu press briefing afterwards.

Lavrov speaks fluent if slightly accented English, honed from his many years working as Russia's envoy to the United Nations, but he always switches to Russian for public comments at home or abroad.

His choice of English in Geneva appeared to be a clear attempt by Moscow to reach out to foreign audiences a day after Vladimir Putin published an article in the New York Times to "speak directly to the American people".

Kerry speaks several European languages pretty fluently -- although not Russian -- and he has a deep love of Europe, having traveled widely around the continent.

The top U.S. diplomat, who served for almost three decades in the U.S. Senate, has said that World War II, as well as following his father to Cold War diplomatic postings in Berlin and Oslo, taught him valuable lessons about diplomacy.

Both of the same generation -- Kerry is 69 and Lavrov 63 -- they may have found common ground in their experiences growing up on either side of the Iron Curtain.

Despite his dour appearance, Lavrov also has a wry sense of irony, setting him apart from the dry apparatchik style of many Russian cabinet members, and no doubt appealing to Kerry, who has a playful sense of humor and often cracks jokes with his staff.

On Kerry's first visit to Moscow as secretary of state in May, the two men spent a long time walking around the gardens of the foreign ministry hatching a plan for Syria peace talks.

While Kerry, the taller of the two, strolled often gesticulating hands in the air, Lavrov walked with his hands in his pockets as if deep in thought, the two often stopping for long face-to-face conversations.

Tellingly, Kerry also seems to have no trouble reaching Lavrov by telephone. The Russian diplomat once avoided Clinton for days last year when she wanted to discuss Syria with him.

The two men, who are spending three nights in the same luxury hotel where the famous reset button was debuted, may also be bonding over their late-night dinners.

Lavrov is known to enjoy Scottish whiskey, while Kerry is partial to the occasional beer or glass of fine wine.