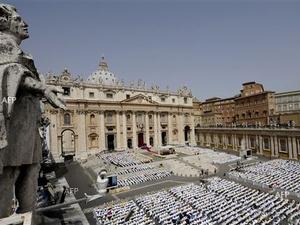 The Vatican is to unlock its secret archives for an exhibition on Rome's Capitol Hill next year, officials said Tuesday.

Documents including an account of the 17th century heresy trial of telescope inventor Galileo Galilei will leave the Holy See for the display entitled Lux in Arcana, opening in the city's Capitoline Museums in February.

The 'Dictatus papae' of Pope Gregory VII, an 11th century script asserting the pontiff's powers, will also go on show along with correspondence between Pope Clement VII and English lords on the annulation of Henry XIII's marriage to Catherine of Aragon.

The showcase will mark the 400th anniversary of the creation of the Vatican Secret Archives by Pope Paul V.

The Holy See's number two, Cardinal Secretary of State Tarcisio Bertone said at a press conference: "The inherent richness of this exhibition is amplified by the fact that it is being organized outside the Vatican, on the Capitol Hill which symbolically represents the 'heart' of Rome and its relationship with the papal city down the centuries."