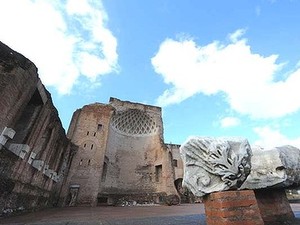 Lack of money mean parts of Roman emperor Hadrian's villa have had to be closed off to tourists because they are in danger of collapse, an Italian paper reported Wednesday.

The historic site at Tivoli, 24 kilometers (15 miles) from Rome, received only 370,000 Euros (530,000 dollars) to maintain the villa and its grounds, Il Corriere della Sera reported.

But those responsible for the site, which spreads over 80 hectares (nearly 200 acres), say it needs at least 2.5 million Euros, the paper said.

They complained that over the past three years they had received only 1.5 million Euros of the 6.7 million they needed.

As a result, they had had to close off more and more areas with metal barriers and signs warning of the risk of collapse.

The villa, known as the Villa Adriana, has been listed on UNESCO's world heritage list since December 1999.

One expert, Federica Chiappetta, told the paper that as well as the state of the site, visitors had also been put off by the lack of information.

The villa was built between 117 and 138 AD on the orders of the then emperor, Hadrian.

UNESCO calls it "a masterpiece that uniquely brings together the highest expressions of the material cultures of the ancient Mediterranean world."