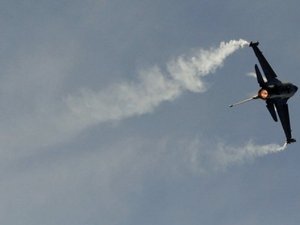 Egypt's interior ministry said Wednesday that a sonic boom from an overflying aircraft was the cause of a loud "explosion" that sent Cairo's residents in a panic.

"The sound of the explosion in the (southern neighborhood) of Maadi and in central Cairo was the sound of a plane that broke the sound barrier," deputy interior minister Murad Mohsen said in a statement.

The sound of the blast shook windows in Maadi and was heard as far away as northern Cairo, residents told Agence France Presse.

It sent Cairenes in a panic, amid heightened tensions in Egypt almost five months since a popular uprising forced president Hosni Mubarak to stand down after three decades of autocratic rule.

Insecurity has gripped the country since the former president's fall in February, which saw power handed to the Supreme Council of the Armed Forces.

Last week, bloody clashes erupted between protesters and anti-riot police in Cairo's Tahrir Square amid mounting frustration with the country's military rulers over the pace of reforms.

Earlier Mohsen said authorities had received reports of an explosion and would be investigating.

"We have received reports from several citizens who say they heard a loud explosion," in different parts of the city, Mohsen told MENA, in statements broadcast on television.

"Security services have been sent to the various areas to investigate the reports," he said.