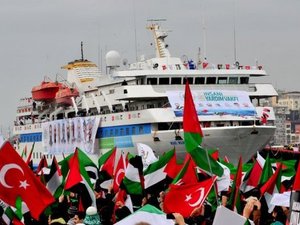 Israel's prime minister said on Wednesday ties were improving with Turkey, as officials worked to patch up relations before the release of a U.N. report on last year's fatal raid on a Gaza flotilla.

Speaking in Bucharest at the start of a trip to Romania and Bulgaria, Benjamin Netanyahu said Israel and Turkey were looking to heal the breach in relations that followed the killing in May 2010 of nine Turkish activists by Israeli commandos who stormed a convoy looking to run the blockade on Gaza.

"We are seeking ways of improving our current relations," Netanyahu told journalists.

Following the raid, Turkey withdrew its ambassador in Tel Aviv, vowing that bilateral relations "would never be the same."

Several attempts to restore the relationship between the former close allies have led nowhere, but Israel was encouraged after the owners of the Turkish ferry, on which the worst of last year's violence occurred, said it would not be participating in a second attempt to reach Gaza this month.

"We are trying to make concrete steps," Netanyahu said.

"Apart from the fact that Turkey did not participate in the (latest) flotilla, there are other signs allowing us to talk of an improvement in our relations."

Over the past few days, the Israeli press has been filled with reports both sides are working to find a formula to get ties back on track before publication of a U.N. report into the raid on the Mavi Marmara ferry, which is reportedly due to be released on Thursday.

The newspaper Haaretz on Tuesday cited a senior Israeli diplomatic source who had read a draft of the report as saying that it upheld the legality of the blockade but found the commandos used excessive force.

The report is also expected to criticize Turkey's role in the organization of the flotilla, which Israel says included a number of violent activists who attacked its troops.

Key to any reconciliation is Turkey's demand that Israel apologies for its actions.

But Foreign Minister Avigdor Lieberman on Wednesday reiterated his opposition to such a step in remarks to the parliamentary foreign affairs and defense committee.

"An apology is not a compromise -- in my view, it is humiliation and abandonment of our soldiers."

But fellow cabinet minister Matan Vilnai took the opposite view saying that as Israel had already expressed regret for the loss of life it would do no harm to apologies again.

"If we apologies for mistakes made in the 2010 flotilla -- for which we have already apologized -- we need to find the right way to do it," he told parliament's television channel.

"Israel's strength is clear, its place in the world is clear, so there is no instance here of humiliating ourselves," said Vilnai, who is home front defense minister.

On Tuesday, Israeli foreign ministry spokesman Yigal Palmor told Agence France Presse that contacts with Turkey had been intensified in order to solve the crisis and "turn the page" on previous disagreements.