Lone Boat Heads to Gaza as Flotilla Stalls in Greece 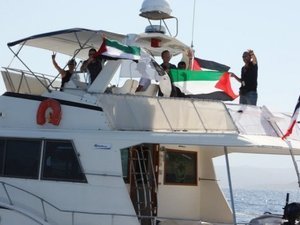 A lone French yacht was on Wednesday headed for Gaza after sneaking out of Greek waters in defiance of a ban on the departure of aid ships aiming to run Israel's blockade on the coastal strip.

The MV Dignite/Al Karama, which left Greek waters early on Tuesday, is heading slowly towards Gaza, a spokesman for the French Boat to Gaza campaign told Agence France Presse, saying they had not yet given up hope they would be joined by others from the ill-fated Freedom Flotilla which had been due to set sail last week.

Pro-Palestinian campaigners on board a second ship, the MV Juliano, were expected to try leaving a Greek port later on Wednesday despite being turned back a day earlier, said a Swedish MP who will be joining the vessel.

Most of the 10 ships which had been due to join the naval convoy are stuck at ports in Greece after Athens imposed a blanket ban on the departure of any vessels destined for Gaza.

Another ship, the Irish-owned MV Saoirse, is currently undergoing repairs at a Turkish port after its propeller was damaged in what activists claimed was "sabotage" by Israel.

So far, only the MV Dignite, which has 12 people on board, has managed to set sail, a spokesman for the French boat said.

"They're getting on very well," Thomas Sommer-Houdeville told AFP by phone from Athens, saying the vessel had begun to move slowly towards Gaza on Tuesday afternoon after waiting for several hours in international waters to see if the Greek, Norwegian and Swedish activists on board the MV Juliano would to also manage to set sail.

"Yesterday afternoon, our Greek colleagues (on board the MV Juliano) were not able to leave, so they decided to start sailing slowly" towards Gaza, he said after speaking by phone to activists on board the Dignite.

"They are now heading for Gaza slowly so if any of the boats manage to get out, they will be able to meet up with them.

"For the time being, our desire is to go to Gaza," Sommer-Houdeville said, admitting the activists on board would later decide based on what was possible "logistically and technically."

"At the moment, we have one boat which has managed to break the Greek blockade and we are hopeful that there will be others," he said.

The Juliano activists hope to set sail from a port near Athens later on Wednesday, with the ship awaiting clearance from the Greek authorities, Maria Norden, a Social Democrat MP from Sweden, told AFP by phone.

"All our on-board papers are in order, we are going to try to leave today," said Norden who is one of six passengers on the vessel.

Greek officials turned back the boat on Tuesday afternoon, she said.

Both the U.S. Audacity of Hope and the Canadian vessel, the MV Tahrir, each of which have some 50 passengers and crew aboard, have tried to set sail since Athens imposed the ban on Friday, but were turned back.

And two of the vessels have also sustained damage, in what organizers claim was sabotage by Israeli agents.

Officials in Athens say they imposed the ban for the "safety" of the activists on board in the wake of last year's bloody showdown, when Israeli commandos raided a six-ship flotilla heading for Gaza, in a confrontation which left nine Turkish activists dead and dozens of people injured.

More than 300 activists from 22 countries had signed up to participate in this year's flotilla, among them dozens of middle-aged and elderly Americans and Europeans.

Israel has made no secret of its determination to prevent the Freedom Flotilla II from reaching Gaza, which has been under a blockade since 2006 after militants there snatched an Israeli soldier who is still being held at a secret location.