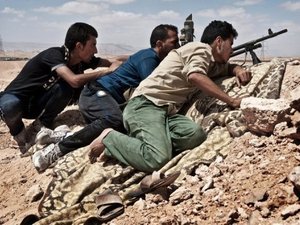 Libyan rebels Wednesday seized the desert hamlet of Gualish Wednesday on the first day of a NATO-backed push on the capital Tripoli and captured a number of African mercenaries, Agence France Presse reported.

Buoyed by French arms drops and NATO-led air strikes, the rebels attacked positions in the Gualish area, in the plains north of their enclave in the Nafusa mountains southwest of Tripoli.

An AFP correspondent, embedded with the rebels, said insurgent fighters were searching houses in Gualish, while gunfire could be heard in the distance.

During the operation, they captured a number of mercenaries, some of whom were seen in a pick-up truck and told AFP they were from Ghana and Mali.

Earlier, a rebel leader from the hill town of Zintan said his forces had coordinated their assault with NATO, which has stepped up its bombing campaign by destroying frontline armor of Moammar Gadhafi's regime in the past week.

"We waited before launching this assault and finally got the green light from NATO this morning and the offensive began," the rebel leader said.

There were intense exchanges of artillery, mortar and cannon fire between the rebel fighters and government troops dug in around Gualish, the AFP correspondent reported.

The area targeted by the rebel offensive is seen as strategic as it also features the garrison city of Gharyan, a government stronghold in the Nafusa mountains.

In an operational update, NATO said it struck four tanks and two armed vehicles in Gharyan, along with command and control centers near the rebel-held western city of Misrata and eastern oil town of Brega on Tuesday.

After a retreat from around the plains town of Bir al-Ghanam last week, spokesman Colonel Ahmed Omar Bani had pledged on Saturday that the rebel army would soon try to push the front line northwards.

Wednesday's offensive comes a day after France said it no longer needs to drop weapons to the rebels fighting the Gadhafi regime since they are getting more organized and can arrange to arm themselves.

However, French Defense Minister Gerard Longuet cautioned against the rebels' prospects of defeating Gadhafi and pushing toward the capital.

Paris acknowledged last week it has made a series of parachute drops of weapons, including rocket launchers, to Berber rebel fighters in the Nafusa mountains, in a move criticized by Russia and the African Union.

Last week the rebels also seized regime bunkers containing rockets, machine guns and other munitions in the desert about 25 kilometers south of Zintan.

On Tuesday, shelling by forces loyal to Gadhafi killed 11 people and wounded dozens more -- mostly civilians -- around the besieged enclave of Misrata, 200 kilometers east of Tripoli, the insurgents said.

The attacks marked another bloody milestone for Misrata, Libya's third-largest city that has been shelled almost continuously since March.

On the diplomatic front, an unnamed senior Russian official was quoted Tuesday as saying Gadhafi would consider stepping down -- an offer that, if carried out, would meet the rebels' central demand.

The rebels have thus far rejected any deal that would leave Gadhafi in power.

Meanwhile, preparations were underway for an international meeting on Libya in Istanbul on July 15-16, as diplomats increasingly mull what post-Gadhafi Libya might look like, with many hoping to avoid Iraq or Afghanistan-style chaos.

NATO chief Anders Fogh Rasmussen said Tuesday the alliance would like to see the United Nations assume the lead role in Libya's transition to democracy in the event Gadhafi leaves power.

Ahead of the Istanbul meeting, Rasmussen said rebel leaders will hold talks in Brussels on July 13 for the first time with the 28-nation North Atlantic Council.

Meanwhile, thousands of Libyans opposed to Gadhafi were spilling into the streets of Benghazi on Wednesday, hoping to bolster rebel moral and send a message to Tripoli.

A Tripoli-based group calling itself "The Free Generation Movement" called on people in Benghazi to go out in force. "We call upon you to come out and show the world and show our nation where we stand."

And in Tripoli, a judge charged rebel leaders with sedition and espionage, saying they would go on trial before a special court.