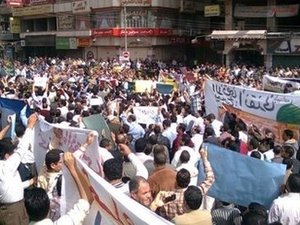 Egypt's Muslim Brotherhood said it will take part in a mass rally planned for Friday to pressure the country's military rulers on reforms, after first announcing it was staying away.

"The Brotherhood has decided to participate in the demonstration on July 8 (aimed at) raising the flag of justice so that all rights can be regained, and all criminals punished and all the demands of the revolution met," it said in a statement on Wednesday.

Rallies have been called across the country to demand that the ruling military council -- which took power after an uprising ousted president Hosni Mubarak in February -- implement promised political reforms.

The Brotherhood initially disassociated itself from the demonstration because one of the rally's earlier demands was to call for a new constitution before legislative elections in September.

An autumn election would benefit the highly organized Muslim Brotherhood, prompting several secular movements to call for a delay to give other groups time to prepare.

Some fear that holding elections before the adoption of a constitution would give the Islamist group too much influence in drawing up the charter.

But organizers of Friday's rally say the constitution-election debate has detracted from the fundamental goals of the revolution and have urged protesters to go back to basics.

Amid popular support, Friday's key demands will include an end to military trials of civilians, the trial of police officers involved in abuse before and after the revolt, and thorough transparent trials of former regime officials.

The Muslim Brotherhood was banned under Mubarak but has since the revolution formed "the Freedom and Justice Party" which plans to contest the elections.

It had stayed away from the first days of the January 25 revolt, although many of the group's youths broke ranks with the leaders and participated in the massive protests that swept the country to demand political change.