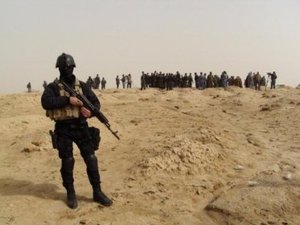 Iraqi authorities uncovered a mass grave with 900 corpses near the central city of Diwaniyah on Wednesday, believed to be Kurds killed during the rule of ousted dictator Saddam Hussein, an official said.

The corpses were found in the Shanafiya region, 70 kilometers west of Diwaniyah.

"The corpses were buried in a trench. There were 900 bodies," said Dakhil Saihoud, provincial head of the Justice and Accountability Commission which investigates issues related to Saddam's regime.

"Initial indications show the remains are those of Kurds. They were transferred to laboratories in the city of Najaf to help in identification," Saihoud said. He said the corpses apparently dated back to the 1980s.

Last April, authorities said they had found another mass grave in Anbar province of western Iraq containing the bodies of more than 800 people, including women and children, executed during Saddam's regime.

During Iraq's 1980-1988 war with Iran, deserters were executed and the Sunni Arab dictator intensified a crackdown on Shiites suspected of sympathizing with Iraq's predominantly Shiite neighbor.

Kurds were persecuted because they were the main opposition to Saddam.

The number of people missing as a result of atrocities committed by Saddam, who came to power in 1979, is estimated at anywhere between 300,000 and 1.3 million, according to various sources.

Human rights groups believe there are hundreds of mass graves in Iraq of people killed during Saddam's rule.

Shortly after the 2003 invasion, the U.S.-led coalition said there were 263 mass reported graves of people executed in Iraq under Saddam, including 40 containing evidence of systematic killings.