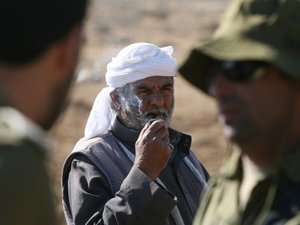 The United States on Wednesday warned the Palestinians against seeking U.N. recognition of a future state not first defined in talks with Israel, as a top Palestinian official met with U.S. diplomats.

"We don't see a contradiction between the efforts being exerted to revive the peace process and our bid to go to the U.N.," chief Palestinian negotiator Saeb Erakat told reporters after his talks at the U.S. State Department.

"Our goal is to get these parties back to the table, and our position on the idea of a U.N. action in September remains that it's not a good idea, that it's not helpful," she told reporters.

Her comments came as a senior U.S. official announced that envoys from the diplomatic "Quartet" for Middle East peace -- the European Union, Russia, the United Nations and the United States -- were to meet in Washington on July 11.

"The main focus of that diplomacy remains to encourage the Palestinians to come to the table within the framework that the president has set," said Nuland.

Amid the diplomatic tussling, the U.S. House of Representatives churned towards voting by week's end on a symbolic resolution warning the Palestinians they risk U.S. aid cuts if they pursue their plans at the United Nations.

The House was expected to overwhelmingly back the measure authored by Republican House Majority Leader Eric Cantor and Democratic House Minority Whip Steny Hoyer just one week after the Senate passed a similar resolution.

The Palestinians "must understand that the solution to this conflict will only come through direct negotiations with the Israelis and not by circumventing the peace process through international parliamentary gimmickry," said Cantor.

"We all know that those negotiations will be difficult; they will be painful, and they will require courage and sacrifice on both sides. But the hard way is also the right way -- and if there is to be any hope of peace, both sides must return to the table without preconditions," said Hoyer.

The resolution also urges Obama to consider suspending aid to the Palestinian Authority pending a view of a unity deal between President Mahmoud Abbas's Fatah faction and the radical Islamist movement Hamas.

"Any Palestinian unity government must publicly and formally forswear terrorism, accept Israel's right to exist, and reaffirm previous agreements made with Israel," it says.

Peace talks ground to a halt in September 2010 when Israel failed to renew a partial freeze on settlement construction in the occupied West Bank.

Since then, the Palestinians have refused to return to talks as long as Israel builds on land they want for a future state.

They are planning to seek recognition of their state within the 1967 lines that preceded the Six-Day War when the U.N. General Assembly meets in September, despite the opposition of both Israel and the United States.

France has indicated that it might recognize an independent Palestinian state if peace talks are not back on track by September.

Germany, like the United States, is opposed to any unilateral steps and accepts the Israeli position that any progress must be made through negotiations.

"Germany, like the United States, is opposed to any unilateral steps and accepts the Israeli position that any progress must be made through negotiations."

What empty words! I do not recall anybody negotiating with the Palestinians when Israel was formed. When will the West wake up and stop using double standards?

Aid to both Israel and Palestinians should be stopped. Both are thorn in everyone's back.