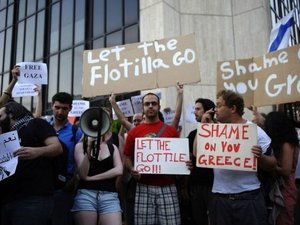 A lone French yacht carrying activists hoping to run the Israeli blockade on Gaza was on Thursday blocked in Crete by the Greek coast guard when it stopped to refuel, an organizer said.

"The Dignite/Al Karama was taken to Sitia in Crete by the Greek coast guard after being stopped in a nearby port while it was refueling," Claude Leostic told Agence France Presse by telephone from Paris.

"The authorities are stopping the boat from setting sail for various administrative reasons," Leostic said.

The boat, which is carrying 12 pro-Palestinian activists, had sneaked out of a Greek port early on Tuesday in defiance of a ban on any ships setting sail from Greece in an attempt to run the Israeli blockade on Gaza.

All the other boats which had been expected to participate in a 10-vessel international aid flotilla to Gaza are currently being blocked from leaving ports in Greece, while an Irish boat, which organizers say was sabotaged, is undergoing repairs in Turkey.

The flotilla had been due to set sail last week but was hit by a wave of administrative obstacles which organizers have blamed on political pressure coming from Israel.

Officials in Athens say they imposed the ban for the "safety" of the activists on board in the wake of last year's bloody showdown when Israeli commandos raided a six-ship flotilla in a confrontation that left nine Turkish activists dead.

More than 300 activists from 22 countries had signed up to participate in this year's flotilla, among them dozens of middle-aged and elderly Americans and Europeans.

Israel has made no secret of its determination to prevent the Freedom Flotilla II from reaching Gaza, which has been under a blockade since 2006 after militants there snatched an Israeli soldier who is still being held at a secret location.