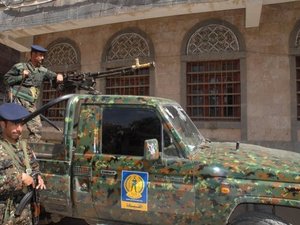 Suspected al-Qaida militants killed 10 soldiers in an ambush on a road in southern Yemen, where the jihadist network has a stronghold, a military official said on Thursday.

The gunmen opened fire on the vehicle in which the soldiers were travelling on Wednesday, north of the city of Loder, in Abyan province, killing them all, the official told Agence France Presse.

Only the driver survived, although he was wounded, a medical official said.

A witness said he saw three armed men shoot at the soldiers, adding they prevented people from carrying away the soldiers' bodies, only allowing them to take the driver to hospital in Loder.

An official at the hospital confirmed the wounded driver was admitted to the facility, which also later received the bodies of the 10 soldiers after the attackers left the scene of the shooting.

Supporters of al-Qaida have strengthened their grip on southern Yemen since a wave of popular protests erupted in late January against the regime of President Ali Abdullah Saleh.

Militants of the Partisans of Sharia (Islamic law) movement seized control of most of the southern city of Zinjibar, near Loder, on May 29, and Yemeni security forces have been engaged in heavy fighting with them since.

The Sanaa government says the militants are allied with al-Qaida but the opposition accuses it of playing up a jihadist threat in an attempt to keep Saleh in power.

The defense ministry's 26sep.net news website meanwhile reported overnight that the leader of al-Qaida in Abyan, Walid Mashafi al-Aassiri, a Saudi, was killed earlier this week in fierce fighting with the army in Zinjibar.

Aassiri was on a list of militants wanted by the Saudi authorities; 26sep.net cited a military official as saying.

Yemen's defense ministry said Aassiri was among around 40 al-Qaida members killed in fighting in Zinjibar on Tuesday.

The Yemeni and Saudi branches of al-Qaida merged in January 2009 to form al-Qaida in the Arabian Peninsula, or AQAP, which is rooted in the country's south and east.

Saudi members of the terror network fled the kingdom for Yemen after a crackdown on them in response to a wave of attacks between 2003 and 2006.

President Saleh, who was a key U.S. ally in its "war on terror", is currently receiving treatment in neighboring Saudi Arabia for blast wounds sustained in a bomb attack on his palace on June 4.

Al-Qaida in the Arabian Peninsula is an affiliate of the global network accused of anti-US plots, including an attempt to blow up a U.S.-bound aircraft on Christmas Day 2009.

It is also the ancestral homeland of slain jihadist leader Osama bin Laden.