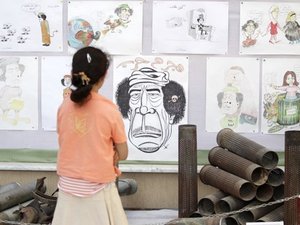 The children, aged between four months and five years, arrived on a flight from rebel-held Benghazi accompanied by relatives. They were welcomed by Health Minister Joe Cassar.

They were immediately taken to Mater Dei Hospital for treatment.

Four children had congenital problems while one needed bone treatment, care that was not available in their country because of the political situation there, a government spokesman said.

The government said the treatment was being given as part of Malta’s commitment to providing humanitarian assistance to the Libyan people.

A senior official with the National Transitional Council arrived on the same flight for talks with the Maltese government.

Neutral Malta has strong contacts with Libya and had remained cautious on the conflict.

The government last month recognized the National Transitional Council (NTC), which represents the forces lined up against Libyan leader Moammar Gadhafi, as "the sole legitimate interlocutor of the Libyan people."

In a statement, the government said senior officials of the NTC had arrived in Malta on the same flight to hold talks with the Maltese government.